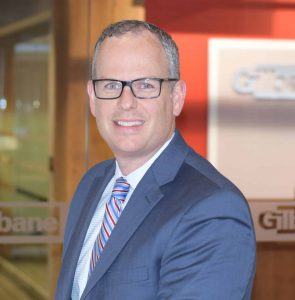 Boston – Gilbane Building Company announced the promotion of Mike O’Brien to business unit leader of its Massachusetts and Northern New England offices.  He began his career at Gilbane in 1993.

He will oversee the company’s work on such projects as TD Garden’s Expansion, Boston Beer Company’s new taproom at 60 State Street and the completion of the new PTC headquarters in the Seaport.

He is also focused on promoting workforce diversity and attracting new generations to the construction trades.  A strong advocate for construction safety, he is particularly concerned with the opioid crisis affecting the construction industry.

He currently serves as the chairman of the Mass. chapter of the Associated General Contractors and is an Overseer on the Board of Trustees of the Boston Architectural College.