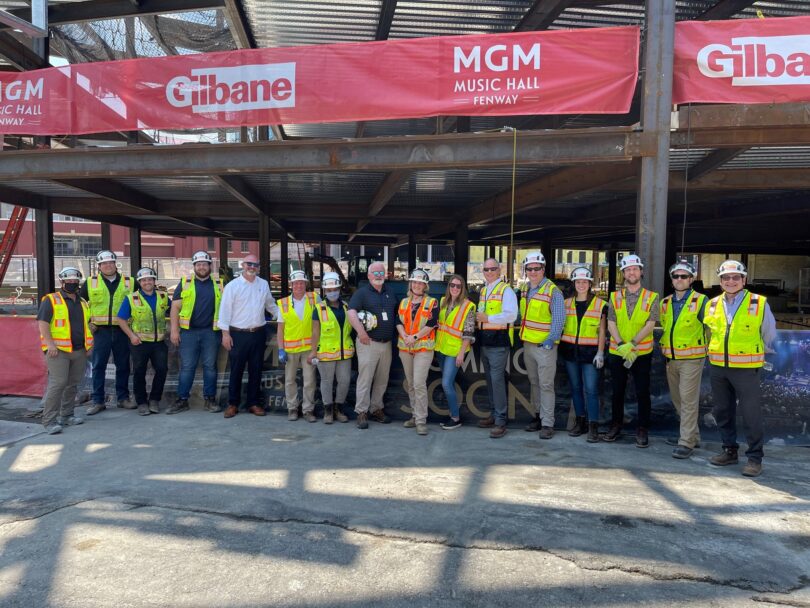 The Gilbane project team at the MGM Music Hall topping out

Boston – Officials from Fenway Sports Group Real Estate (FSGRE), a subsidiary of Fenway Sports Group (FSG), and the City of Boston, joined representatives from Gilbane Building Company and D’Agostino, Izzo & Quirk Architects, Inc. on June 7 to celebrate the official topping out of the new 91,500sf MGM Music Hall at Fenway.

Designed by D’Agostino, Izzo & Quirk Architects, Inc., the new, state-of-the-art performing arts center is being constructed in the triangular lot on the corner of Lansdowne and Ipswich Streets. Once complete, the four-story venue will accommodate 5,000 patrons and play host to musical acts from around the globe. In addition to hosting live shows and concerts, the new space will have a variety of uses and offer the opportunity to partner with local schools, colleges, and other neighborhood organizations to create an epicenter for the performing arts community.

During the ceremony, attended by members of FSG ownership and City Councilor Kenzie Bok, a gold steel beam representing the venue’s naming rights sponsor, MGM, was signed by all attendees, including over 100 members of the project’s construction team.

The new MGM Music Hall at Fenway is expected to be complete in fall of 2022.