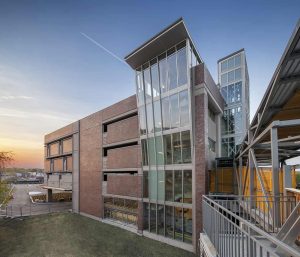 Salem, MA – Transforming the site of a former historic rail yard into a state-of-the-art commuter train station and parking facility in Salem required design creativity to achieve all of the schedule, aesthetic, and economic goals. A total-precast concrete parking structure, complete with an old-time brick appearance achieved with embedded thin brick, helped meet these challenges.

The 6.25-acre yard formerly housed a locomotive roundhouse and turntable from the late 1800s. The new facility features a passenger waiting shelter; a 690-space, five-level parking structure; a station with at-grade bus platform; and a pedestrian bridge connecting a raised street to the structure’s second level. 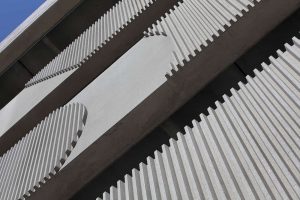 After an extensive historic-data recovery phase, the project required expedited construction to meet the tight schedule. To achieve that, a total-precast concrete design was created for the parking facility. Unistress Corp. fabricated the 535 precast concrete components.

Designers initially planned to use brick for the parking structure’s façade, but that plan changed. “The use of brick was highly desirable to fit in with the surround historic structures,” explains Deborah Fennick, principal at Fennick McCredie Architecture. “However, the owner did not have the time or budget necessary for traditional hand-laid brick.” 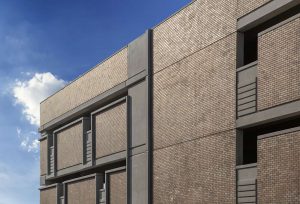 The precast concrete spandrels had thin brick embedded into them, providing a traditional look in a panelized system. “The use of embedded thin brick in the larger concrete panels brought the warmth and materiality that was desired by the community but allowed the schedule to be maintained,” she explains. “Additionally, the use of embedded brick greatly reduces the need for future maintenance associated with traditionally laid brick.” 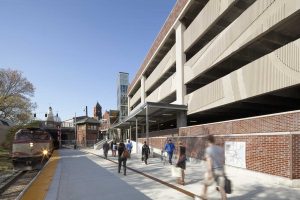 Precast concrete’s plasticity also aided the design. “Aesthetically, the use of precast concrete was an attractive option, in that it could be manipulated to provide multiple aesthetic approaches with a single subcontractor and single base material.” It also simplified construction and reduced the potential for coordination errors, she notes.

Due to site constraints and the significant ground-transportation requirements, seismic shear walls couldn’t be used in their traditional arrangements. Structural engineer Desman used lock-up devices connecting double tees across the building joint to transfer loads. “This eliminated the need for a shear wall and the associated deep foundations, reducing cost and construction scheduling,” Fennick explains. The erection of the precast concrete components was completed in only two months.

The aesthetic design was planned to minimize the predominantly horizontal expression of the open parking structure. The historic nature of the site was acknowledged with the use of patterned spandrels in two colors that evoked images of steam locomotive wheels and drive bars. The design was accomplished with sculpted, deeply ribbed formliners. The 44-foot-long molds were created in 14 separate panels and reassembled at the precast plant.

Precast concrete’s versatility helped ensure the project met its varied goals. “The use of precast concrete allowed the project architects and engineers to fast-track the schedule with the use of early competitive bidding and an efficient erection process that would not have been feasible using other cost-competitive methods,” Fennick says.