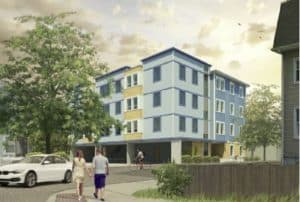 Boston – MassHousing has closed on $22.8 million in affordable housing financing to the non-profit, Just-A-Start Corporation (JAS), for the construction of 23 affordable apartments and to renovate and preserve the affordability of 65 existing apartment units in Cambridge.

JAS is combining the 45-unit Linwood Court and 20-unit Squirrel Brand affordable housing communities and will construct 23 new affordable units on a portion of its Linwood Court property. The new, 88-unit housing community will be named Squirrelwood and will be available to households earning a range of incomes, including 10 units of workforce housing for middle-income families.

Among the renovations planned by JAS on the existing properties are the replacement of kitchens, bathrooms, and flooring in individual units, as well as new siding, roofs, hot water piping, and windows. The buildings will be made significantly more energy efficient through the addition of new insulation, and new landscaping will be added to the site.

The contractor will be Callahan Construction Managers. The architect is Davis Square Architects and the management agent is Maloney Properties.