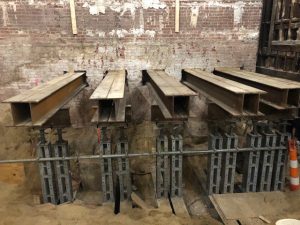 Needle beam shoring supports a load bearing masonry for the installation of a new elevator in Adams House.

Cambridge, MA – A treasure trove of history, a living museum, the site of fireside chats with dignitaries, the residence of Franklin D. Roosevelt, Robert Frost, and John Lithgow (to name a few) – these facts just begin to tell the story of Adams House, Harvard University’s most historic undergraduate residence in Cambridge.

The seven residential halls that make up Adams House were built at the turn of the 20th century (except for Apthorp House, built in 1760), and Adams has been beloved ever since for its diverse and eccentric character, its Germanic architectural style and Victorian era rooms. These features have become the stage for creativity and community among its students.

For these reasons and many more, Harvard students and faculty made a request to “keep Adams weird” in face of the current renovation project underway.

And so, the challenge is on. Adams House is one of 12 undergraduate residential houses at Harvard. The renewal plans have been broken down into three phases over the course of four years, with phase one consisting of upgrading amenities and improving accessibility in Claverly Hall (1893) while preserving its historical detail and artistry. New accessible entrances, fully renovated living spaces and the addition of two elevators are some of the renovations taking place during this construction phase.

To provide structural support, Marr Scaffolding Company’s Shoring Division installed shoring throughout the six-story hall.  Work began in the basement and involved shoring for the removal of approximately 30 masonry piers and granite footings, making room for the installation of new structural steel supports. The hall’s floors were shored, removing wood joists and flooring from the basement to the roof allowing for the installation of one of the masonry elevator shafts.

Lastly, Marr shored the hall’s load-bearing masonry wall (10,000 lbs./ft.) to enable construction of a new concrete wall and footing for the second elevator.

Marr’s sister company, Isaac Blair & Company, assisted with the installation of 70 pieces of wood cribbing, two layers deep, upon which heavy-duty shoring was set and eleven W12 x 40 needle beams (weighing 800 lbs. each) were rigged in by Marr Crane & Rigging.

Additional work in Claverly House consisted of shoring for the fifth-floor exterior masonry wall rebuild, shoring for new ridge beams, and shoring of floor joists for the installation of new beams and wood bearing walls in various locations.

The abutting Adams Senior House was also shored with corner bracing, which supported the exterior walls to allow for floor removal and new floor installation. Various types of shoring including Shore-X, GASS, Aluma and Mabey, were used throughout the project.

Overall, this large-scale shoring project has required Marr to carefully sequence work and coordinate with other trades. Additionally, strategic planning for the transfer of material in and out of the site has been crucial due to space limitations.

Shoring will remain in place through mid-February as the Adams House Renewal continues.

Marr Scaffolding Company was contracted by JDC Demolition and Lee Kennedy in July 2019.