Boston – Per the state’s Chapter 40B law, Massachusetts requires each city and town to have 10% of its housing stock as affordable. While the Massachusetts Department of Housing and Community Development lists Boston as having an impressive 18.30% subsidized housing inventory, this is not enough to cover the soaring demand. The Boston Housing Authority provides affordable housing to more than 58,000 residents in and around the city of Boston, but receives over 10,000 new applications each year. With more applicants than available affordable housing, the wait can sometimes take years.

Thanks to Kaplan Construction, a WBE general contractor and construction management firm, Boston’s limited supply of affordable housing will soon increase. Kaplan is currently responsible for extensive renovations at three complexes in Boston. Together, these projects will provide 127 rent-assisted apartment units, as well as retail and office spaces, common amenities, and community space.

Kaplan is in the process of completing the rehabilitation and adaptive reuse of a historic building at 2101 Washington Street. Formerly home to the Tropical Foods supermarket, the project will create 30 mixed-income rental units, ranging from studio to three-bedroom units, and 7,500sf of retail space, a building management office, lobby, and bicycle storage closet. The 44,000sf building requires extensive renovations, including new framing, roof, and core area for the elevator and stairwells. Kaplan is installing all new utilities (gas, water, electric, sewer) as well as new mechanical, electrical, plumbing and fire protection (MEP/FP) systems. The building will receive new windows, storefront, and stucco on the exterior of the building, in compliance with National Park Service standards.

The project, expected to be complete in early fall, is the outcome of an eight-year effort by the Roxbury community and the city of Boston to bring economic diversity and private investment to Dudley Square. 2101 Washington Street is owned by Madison Park Development Corporation (MPDC), a leading developer of affordable housing in the nonprofit sector and one of the largest community development corporations (CDCs) in Massachusetts. 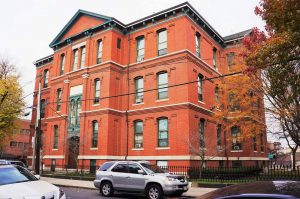 Originally built in 1912 and converted to senior low-income housing in the 1980s, the Theodore Lyman School’s historic red-brick structure is currently undergoing much-needed renovations. Kaplan is tasked with modifying and rehabilitating the occupied space to create a mix of 45 rent-assisted studios and one-bedroom apartments, including five handicapped accessible units, plus office space, common amenities, and community space. Interior and exterior renovations to the Lyman School Apartments include: installation of all new windows, kitchens, and flooring; masonry restoration; painting; sprinkler system extensions; installation of central air conditioning; and building upgrades to be in compliance with the Americans with Disabilities Act (ADA), including an exterior ramp and an interior lift. Located at 30 Gove Street in East Boston, the 40,000sf, five-story elderly housing apartment project is being subsidized by the federal government’s Housing and Urban Development Division (HUD) and supported by the East Boston Community Development Corporation. The building was listed on the National Register of Historic Places in 2014. The project is anticipated to be finished this summer. 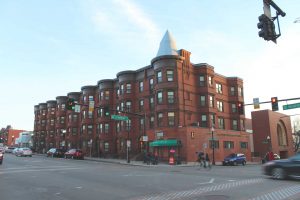 Kaplan Construction’s continued dedication to economical housing solutions as well as employing local construction workers and minority subcontractors has resulted in numerous partnerships with CDCs over the last four decades. With a desperate need for affordable housing felt across the country, Boston’s housing market is benefitting from Kaplan’s ability to provide value and quality to this important sector.