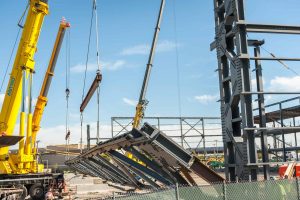 Bedford, MA – In late August, Jet Aviation, Massport, and PROCON celebrated a raising of the beam (truss) on a new 40,000sf hangar under construction at the Boston/Bedford location. PROCON of Manchester, N.H., is the construction manager for the project, and SAA Architects and Design of Iselin, N.J., is the design architect.

The 40,000sf project underwent preliminary enhancements earlier this year when a 92,000sf ramp and apron upgrade were installed, along with two new roads accessing Hanscom Drive. In addition, two parking lots were added, one for MassPort and the second for Jet Aviation clients, employees, and visitors.

The new facility upgrade is designed to improve operational safety and efficiency with a capacity for the storage/maintenance needs of aircraft up to the Gulfstream G650 and a Global 6000. Plans also include a 16,000sf office and shop space, and a two-story 13,000sf state-of-the-art fixed-base operator (FBO), to accommodate the customized needs of the Jet Aviation clientele.

Upon completion, the upgraded facility will feature a state-of-the-art architectural design with the emphasis on safety and efficiency.

Raising the beam (truss) was a hazardous procedure requiring meticulous planning and precision crane maneuvers. Weeks of pre-planning included a presentation to Massport with a complete crisis management plan. Strategic planning culminated in a matter of hours as Astro Crane experts utilized two hydraulic cranes to hoist the 240,000-pound mammoth beam into place. It was a spectacular sight as the 300 feet long by 20 feet tall truss spanning the entire back of the hangar swung into position. Standing at the ready, were two A.S.P.E professionals guiding it into place and connecting it to the column. The remainder of the day was spent securing 66-bolt connections to the frame.

The beam raising process was an achievement seen and felt by all in attendance. Tim Johnson, Program Manager of Construction at Massport was impressed with the process. Tim stated, “Your entire team, including contractors, erectors, designers and engineers, worked in collaboration with the Massport for two weeks to develop a comprehensive work plan to support the critical tandem crane pick of this 300’ X 20’ 129 ton truss. I commend the team for their professionalism and willingness to work together in developing a sequence of erection that focused on safety as a top priority.”