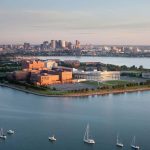 Boston – J. Derenzo Co. has been awarded a large infrastructure project at UMass Boston. Working as part of the BOND Brothers team, J. Derenzo Co. will perform full reconstruction of all the roadways, install major utilities, and complete landscaping throughout the 177-acre campus.

Work on the $68 million project will be completed in phases to preserve traffic flow and pedestrian access on the active, occupied campus. Scheduling and traffic management will be key components of the project to ensure safety and steady progression of work while mitigating impact to the campus operations, students, and visitors.

The team performed site layout, set up erosion controls and a traffic management plan, and drilled test pits. Project completion is slated for the fall of 2016.