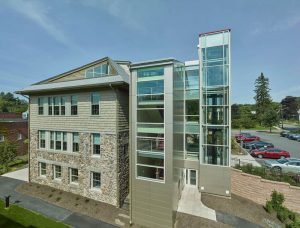 Great Barrington, MA – Croxton Collaborative Architects (CCA), a founder of the modern sustainability movement, announced the recent completion of the 21,000sf international headquarters for Iredale Mineral Cosmetics (IMC) in Great Barrington. Allegrone Construction Company of Lenox was the general contractor.
Adding to the company’s smaller home base nearby, the new structure represents the rehabilitation of the abandoned 1886 William Cullen Bryant School building (and its early 1900s addition), a Massachusetts Cultural Resource, as a 21st century center of operations. The revitalized building is a high-performance structure with daylight in every regularly occupied space. 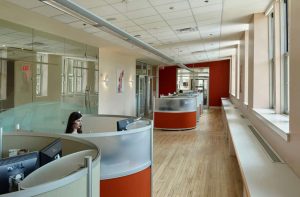 CCA went beyond the town’s stormwater runoff and flooding concerns (the site is located less than 400 feet from the Housatonic River) with a comprehensive rain garden system integrated with a new stormwater detention tank. The project achieved a 93% diversion of waste from landfills (LEED requires 52%). The building itself will realize a 46% energy reduction over standard construction. 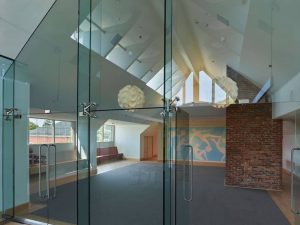 A new main entrance was created on the north façade’s central bay, adjacent to the parking lot. Inside, CCA maximized space in the two-story stone-and-shingle building in several ways. By creating a circulation tower comprising an elevator and staircases as a freestanding element, all of the historic façades retain their strong presence. By claiming the building’s attic and basement as functional space, the building’s usable area was increased from 12,000sf to 21,000sf without expanding its historic perimeter walls. The structure’s roofline was extended, and dormers were added to the attic floor to enhance light infiltration. A new outdoor space cut into the roof serves as an extension of the light-filled conference room, the floor-to-ceiling windows of which provide a soaring view of East Mountain and the verdant Berkshire mountains beyond. 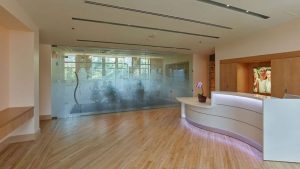 Interior walls were removed to create ample, airy work spaces. Unused chimneys on the first and second floors were opened, proffering exposed brick details and passageways. Original maple flooring remains on the first and second floors, with school desk bolt marks still visible in some places, and noise is mitigated by acoustical ceiling tiles. New floors were installed on the third (attic) floor and on all of the building’s stairs. 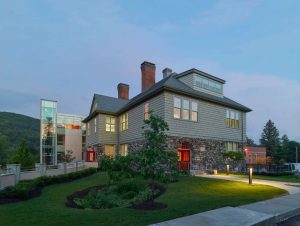 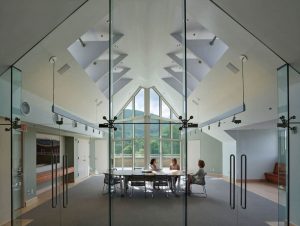 The building, which preserves the historic context and original appearance of the school and was vacant since 2005, has developed into a modern, humanistic workplace.

The decision was made early on by president and founder of IMC, Jane Iredale, to restore the building under her ethos of preservation and environmental stewardship. Achieving sustainability goals beyond the objectives of its LEED Gold aspirations, the project serves a central role in the revitalization of the town’s Special Business District, part of a four-acre downtown redevelopment plan.

“This building represents an esteemed consumer company’s willingness to undertake leadership in environmental excellence while restoring a beloved historic structure within the community as their new headquarters,” says CCA President Randolph R. Croxton, FAIA, LEED AP. “Divorced from an urban environment yet inextricable to its town, Iredale’s new complex sets an example for the exceptional results possible when a client’s humanistic goals are aligned with its stated mission and its architect’s design principles.