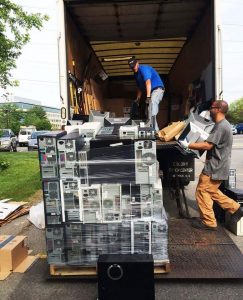 Waltham, MA  – Hobbs Brook Management LLC recently held park-wide electronic recycling events at its Norwood, Waltham and Wakefield, Massachusetts and Johnston, Rhode Island campus’ resulting in a collection total of 15,950 pounds of e-waste. Together with Goodwill Industries of Rhode Island (Goodwill), Hobbs Brook was pleased to offer this 4th annual event to its tenants and employees in Massachusetts and Rhode Island. Goodwill was on site to accept donations from park tenants and employees, and gift bags including t-shirts and other Hobbs Brook items were distributed to participating donors. Visitors were also entered into a raffle for prizes including an iPad, Red Sox Tickets, and a night at the Four Points by Sheraton Norwood, owned and operated by Hobbs Brook Management.

“These events are a fantastic help to Goodwill as we place people with disabilities and other barriers to employment into the work force,” said Kevin Fisette, director of donated goods at Goodwill Industries of Rhode Island. “For the fourth year in a row, Hobbs Brook Management’s participation in our recycling efforts has greatly contributed to our annual goal of nearly 400,000 pounds of recycled e-waste. It was another series of successful events, and we’re looking forward to continuing our partnership with Hobbs Brook Management.” 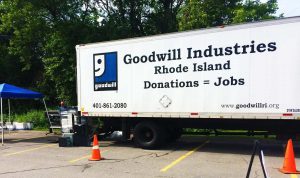 Hobbs Brook hosted the event with three goals in mind. The first was to offer a much-needed recycling opportunity for tenants within the park, many of whom packed their cars with everything from computers, to microwaves, to vacuum cleaners and more. The second goal was in accordance with Hobbs Brook’s GREEN initiative, which was formed to promote sustainability across all Hobbs Brook endeavors. The third goal underscores Hobbs Brook’s culture of supporting community-based programs and activities. Known throughout the greater Boston area as a philanthropic organization, Hobbs Brook continues to find new ways of supporting programs that in turn support community development, job creation, and the concept of ‘paying it forward’.  Through these events, Hobbs Brook tenants have donated a total of 123,320 pounds of electronic waste over the past four years.

“Our partnership with Goodwill Industries of Rhode Island has opened the door for HBM employees to support local communities year after year,” said Thomas Dusel, president and chief operating officer of HBM. “We hope to continue building relationships such as these in our efforts to promote sustainability and remain an avid supporter of our surrounding neighborhoods.”

Through its partnership with Dell, Goodwill Industries of Rhode Island has become one of 2,220 ‘Reconnect’ computer recycling sites across the nation, and the only ‘Reconnect’ site in the state of Rhode Island. Its goal is to recycle between 300,000 – 400,000 pounds of e-waste annually and create green jobs locally. Dell originally established the ‘Reconnect’ partnership with Goodwill Industries International in 2004. Goodwill employees manage the collection and disassembly of the equipment, and the donated equipment that meets the program’s quality criteria is resold. Devices in need of repair are either refurbished or broken down into parts to be recycled.  Goodwill Industries of Rhode Island uses this operation to support their mission of providing job training and education to people with disabilities and other barriers to employment.