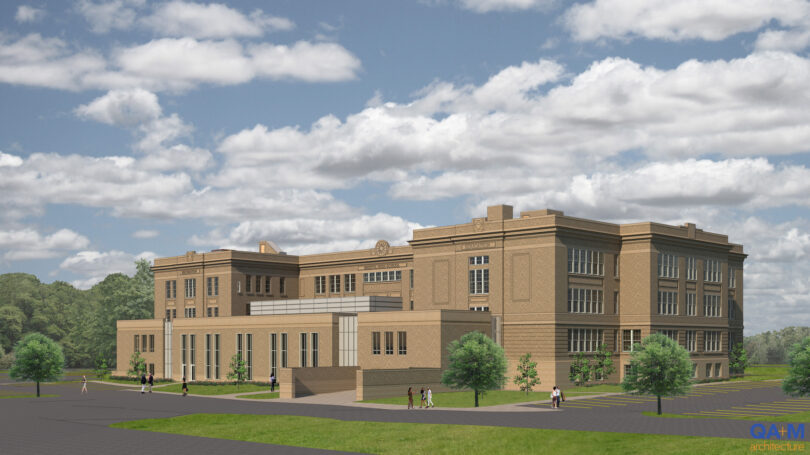 Rendering of the southwest corner of the historic Bristol school building.

Bristol, CT – Two of Connecticut’s commercial construction contractors have joined together to pay homage to the city of Bristol through the renovation of a nearly century-old school, shuttered since 2012. 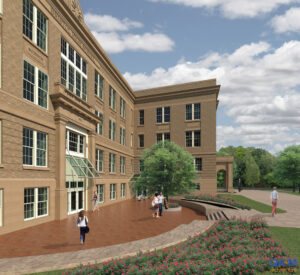 The D’Amato+Downes Joint Venture, D’Amato Construction Company of Bristol and Downes Construction Company of New Britain,  are renovating the former Memorial Boulevard School, located in Bristol. The school opened in 1921 but was closed in 2012 when two new schools opened in the city. It has been vacant ever since, except for a few performances in its theater in 2014 and 2015.

The land to build Memorial Boulevard was donated to the city of Bristol by Albert Rockwell, a local industrialist, inventor, manufacturer, and philanthropist. Rockwell gave very specific directives regarding his intentions for the property’s uses in addition to building a major roadway.

“The Memorial Boulevard School was built at a time of great prosperity in the city of Bristol,” said Kenton McCoy, AIA, renovation project architect and associate principal at QA+M Architecture. “No expense was spared in creating a building of great beauty and utility. The great pride that the city had for its civic structures can be felt in the noble proportions of the classical revival architecture of the building.”

Restoring the 107,000sf, five-level building, which is listed on the National Register of Historic Places, to a premier magnet school with historic magnificence is the mission of the joint venture. “We are bringing back one of Bristol’s grandest buildings for its intended use: education,” said Anthony D’Amato, preconstruction and scheduling resource manager for the D’Amato+Downes Joint Venture. 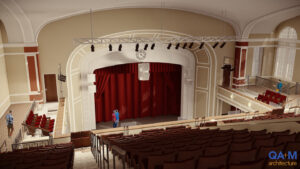 In addition to renovating the old building, the D’Amato+Downes Joint Venture will construct a 17,000sf addition, housing a 6,000sf gymnasium. The new addition will also contain a kitchen and theater support spaces which include a scene shop, costume shop, dressing rooms and a loading dock. The addition will be scaled and detailed to complement the historic school building.

The newly renovated school will open in summer 2022, a century after it first opened its doors to Bristol students in 1922.

Contributing significantly to this news were John Smith, chairman of the board of finance for the City of Bristol and building committee member; and Tim Callahan, architect, project manager for Bristol Public Schools.