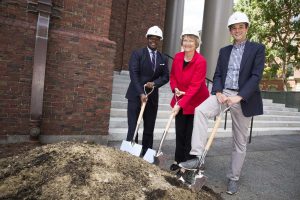 Newton, MA – As the Class of 2016 crossed the threshold of their academic lives, it was time for Memorial Church to undergo its own transformation. Designed by university architects Coolidge, Shepley, Bulfinch and Abbott, and dedicated in 1932 on Armistice Day in memory of those who died in World War I, the church had last undergone renovations more than 30 years before.

“Elaine Construction is honored to have been selected to team with Harvard University and Payette for the renovations and upgrades to such a significant and central building to the Harvard Community,” said Lisa Wexler, Elaine Construction president.

The ceremonial ground breaking, which took place on June 13, marks the start of long-deferred building and infrastructure maintenance, including accessibility and safety compliance upgrades; a reconfigured lower level; and a new climate-control system to allow for improved use of the church year-round. In addition, the renovations will bring the church up to Harvard’s green building standards.

Scheduled for completion before the new year, the upgrades will ensure service to the growing community.