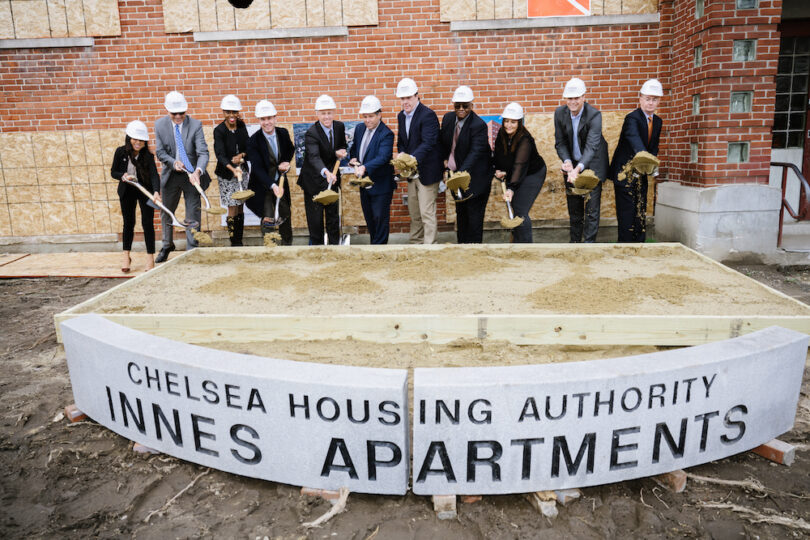 Chelsea, MA – The Innes Redevelopment team, led by co-developers Joseph J. Corcoran Company (JJC) and John M. Corcoran & Company (JMC), along with Marcus Partners and Cambridge Savings Bank in partnership with the Chelsea Housing Authority (CHA), the Massachusetts Office of Housing and Economic Development and Department of Housing & Community Development (DHCD), recently joined together for the official groundbreaking of the Innes Apartments in Chelsea.

This redevelopment will be the first demonstration of DHCD’s Partnership to Expand Housing Opportunities (PEHO) program, which establishes public-private partnerships between housing authorities and developers to preserve public housing through the creation of mixed income communities.

“Today’s groundbreaking is the culmination of years of collaboration and hard work. However, this celebration is just the beginning of new lives for our residents and future generations of people who depend on the Chelsea Housing Authority,” said Al Ewing, CHA executive director. “I am proud of the team we put together who put our residents first and equally proud of the dedication and commitment of our residents who spent countless hours advocating for themselves and their neighbors to ensure these new homes will meet their needs – the stewardship of this team will be an example for generations to come.”

The eight deteriorating Innes apartment buildings will be demolished as part of this redevelopment to make way for a new 350,000sf, state-of-the-art community. The newly reconstructed Innes Apartments will provide new homes for the current residents of 96 units of public housing at the site, an additional 40 units of new middle-income opportunities for new families, and 194 market rate apartments near public transportation. The redevelopment will also include onsite amenities for residents and ground-floor retail space to activate the Central Avenue Smart Growth area.

The sources of capital for the project came from public agencies, DHCD, the MassWorks program and the City of Chelsea, as well as private capital from Cambridge Savings Bank (and participants Eastern Bank and Harbor One Bank), Marcus Partners, JMC and JJC. The total development investment on the project is $155 million.

Construction of the Innes Redevelopment is being led by Plumb House, Inc. with the expectation that residents will be able to move back into new homes beginning in 2024.