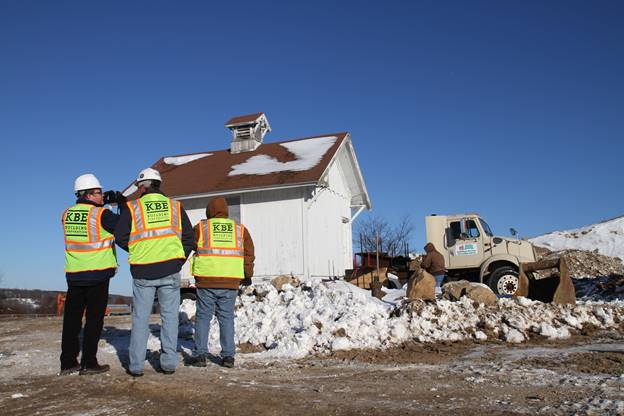 Farmington, CT – To celebrate October as Energy Awareness and Manufacturing Month, representatives from New England Airfoil Products (NEAP) and Eversource recently led a tour of energy efficiency improvements at NEAP’s Farmington headquarters. The upgrades will reduce the aerospace manufacturer’s energy costs by more than $50,000 annually and enhance its overall competitiveness and sustainability efforts.

Guests toured NEAP’s manufacturing facility and learned about the newly installed energy-efficient LED lighting system that uses up to 75% less electricity while supporting the quality control of aerospace turbine blade machining and finishing. The lighting system also helps to reduce operating and maintenance costs by nearly 80%.

Additional improvements included the installation of a new air compressor with variable-frequency drives (VFDs) to regulate air handlers, exhaust heat, and cut energy use by more than 35%, as compared to non-VFD models.

NEAP’s energy efficiency efforts will result in approximately 600 million kilowatt-hours of electricity saved, and CO2 reductions of more than 470 tons, the equivalent of taking nearly 90 cars off the road for a year.

Since 2016, NEAP has invested more than $20 million in new manufacturing equipment, expanded its workforce at its 36 Spring Lane headquarters, and worked with Eversource on facility upgrades to enhance energy efficiency.

“Connecticut’s relationship with NEAP and Eversource is a leading example of how being aligned when it comes to job growth, workforce development, and doing right by our environment strengthens our economy,” said Governor Ned Lamont. “Seeing the growth at NEAP, combined with the company’s environmentally conscious vision, is the kind of success story that Connecticut needs to be telling all over the country.”

“What we spend on energy is critical to our success and competitiveness,” said Clive Cunliffe, North American president of Pietro Rosa, that owns and operates NEAP. “That’s why if there’s an energy project that will support our growth, we’ve considered it, and have likely completed it. Our ongoing partnership with the state of Connecticut and Eversource is helping us keep operating costs down and optimize our capital investment. We’re proud of the progress we’ve made and are fortunate we have access to partners who are invested in our success.”

“From the beginning of our partnership with NEAP, we knew we were in good company,” said Eversource Senior Vice President and Chief Customer Officer Penni Conner. “The NEAP team views energy efficiency as a requirement to support its sustainability goals and its bottom line. We look forward to continuing to help NEAP effectively manage its energy use and support its continued growth here in Connecticut and beyond.”

NEAP added more than 125 full-time employees and took on new assignments during the past three years. Pietra Rosa recently signed a 10-year, long-term agreement (LTA) with Pratt & Whitney, a division of United Technologies Corp., to supply airfoil products for both commercial and military engines. The LTA, which may extend to the entire Pietro Rosa TBM Group in Europe and the United States, will support Pratt & Whitney’s F135, PW4000 and the Geared Turbofan™ family of engines.

The tour concluded with a company-wide lunch attended by more than 100 NEAP employees.