Highlights include portraits of 16 people who have had a major impact on our society.

New Haven, CT – The new Achievement First Amistad High School in the Newhallville section of New Haven, built by Fusco Corporation on the site of the former Martin Luther King School (1968), carries on the legacy and pays homage to what had been there before (exactly what the neighborhood and city had asked of Achievement First and the building team). 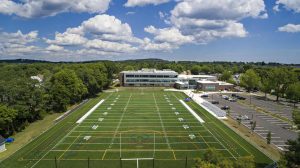 The official dedication of the school took place in June 2015 and celebrated not only the new facility but the accomplishments of the school’s students; most notable were U.S. News and World Report recognizing the school as the No. 2 high school in the state of Connecticut in its 2015 Best High Schools Rankings and for the sixth consecutive year of 100% of graduating seniors being accepted to a four-year college or university.

This was the second new school project that Fusco has undertaken for Achievement First, a nonprofit network of 29 high-performing, college preparatory, K-12 public charter schools serving more than 9500 students in Connecticut, New York, and Rhode Island.

The high school, which was built to Connecticut High-Performance standards for Sustainability, also includes a green signage program to bring attention and visibility to the many green features of the school. Fusco Corporation worked with Achievement First to develop and implement this program.

Highlights of this project include portraits of 16 people who have had a major impact on society, including Dr. Martin Luther King Jr., Dr. Maya Angelou, Stevie Wonder, and President Barak Obama. These images were done in decorative glazing along the exterior of the gymnasium windows.

Signs have been strategically placed throughout the building highlighting sustainable features such as recycled content in flooring and ceiling tiles, locally sourced limestone, LED lighting, daylight sensors in each classroom, FSC wood in the gym, and rain gardens throughout the site to treat storm water as well as add beauty to this neighborhood community.