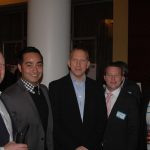 Boston— At a recent gathering,at Davio’s in downtown Boston,  the New England Chapter of the Foodservice Consultants Society International (FCSI) celebrated its 10th anniversary and raised $20,000 for the Greater Boston Food Bank and the Emily A. Swartz Scholarship Foundation.

“It’s important to us that we support our industry, spend time with friends and help others at this time of year,” says Edward Arons, chairman of the local FCSI chapter and senior associate at Colburn & Guyette, a foodservice design firm based out of Rockland. “After 10 years of donating to the food bank, it has become tradition, and this year we wanted to continue that tradition as well as start a new one.”

In addition to the Greater Boston Food Bank, FCSI New England will be donating to a local charity as well. This year’s recipient is the Emily A. Swartz Scholarship Foundation, which was created in memorial of Emily Swartz., the daughter of Davio’s executive chef, Eric Swartz.

While this foundation is still in its infancy its goal is to give back to the school and community programs that Emily Swartz loved most.