An aerial view of the sculpture taken from the attachment point on the 28th floor of One International Place / photo: Tracy Seward

Boston – One of the most unique installation projects in Boston and the Marr Companies’ history took place on May 3 at the Rose Fitzgerald Kennedy Greenway. The project involved the installation of an aerial sculpture that suspends 600 feet in length over the northern end of the Greenway’s Fort Point Channel Park. Made of fiber 15 times stronger than steel, yet light enough to move with the wind, the colorful sculpture was made by hand-splicing rope and knotting twine into an interconnected mesh of more than a half-million nodes. Janet Echelman, the Brookline-based artist commissioned by the Greenway Conservancy, was inspired by the location’s history and wanted the art to speak to the transformation of Boston’s waterfront after the Big Dig. She named the piece, “As If It Were Already Here” a few days after the installation. 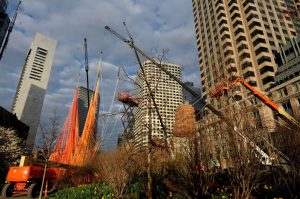 Multiple cranes and lifts work to hoist the net above the tree line on the Greenway / photo: Harry Brett

Last November, Daniel Marr & Son was awarded the contract by GC Shawmut Design and Construction to install the 1-ton sculpture including the engineering, fabrication, and installation of steel connection points at four locations on three different high-rise buildings. According to Shawmut Vice President Kevin Sullivan, the project required a high level of support, workforce, and equipment in order to be completed successfully over one weekend. Knowing this and having worked with Daniel Marr & Son’s President Rich Burns for over 20 years, Kevin said it was a no brainer: “Marr was definitely the partner that we needed to help pull this off.”

After months of planning, Rich Burns and General Superintendent John Seward led a team of over 50 ironworkers, crane operators, drivers, mechanics, and scaffold erectors to complete the task, which required the use of six cranes from Marr Crane & Rigging and multiple aerial lifts and scaffolding from Marr Scaffolding Company. 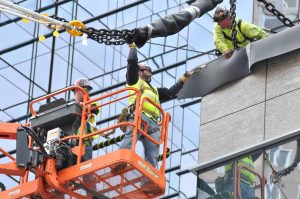 Ironworkers pull in the chains at the end of the net’s structural rope to make connections at an attachment point. / photo: Harry Brett

The netting, which consists of over 100 miles of rope, was shipped in a 6-ft. x 6-ft. wooden crate that was strategically positioned on the Greenway Saturday, the day before installation, along with Marr aerial lifts and booms that assisted with the installation. Early Sunday morning, six cranes with four gangs were positioned on the streets surrounding the Greenway parcel. At 5:30 a.m. the first section of netting was picked up and 10 separate lines were carefully laid out in proper orientation to the four attachment points: the 28th floor of One International Place, between the seventh and eighth floors of 125 High Street and two points on the fifth floor of the InterContinental.

As one crane lifted the center node of the netting, another picked up a different section to help spread it out over trees. Ironworkers attached chains to the end points of the net’s structural rope, and the remaining cranes lifted the lines so temporary connections could be made on the buildings’ attachment points. Grip hoists and chain come-alongs were utilized to help pull the chains in, while gauges were installed at each connection in order for engineers to determine when the correct tension was reached. Once each rope was tensioned to the proper kip loading, the chains were cut and hammer locks attached to make permanent connections. Due to the newness of the rope and the weather, there will be a natural amount of stretching that will require it to be retensioned occasionally.

With the illuminated sculpture now suspended high over the Greenway to the delight of pedestrians below, its presence can serve as a reminder to the construction community that thoughtful planning, collaboration, and coordination among local companies can yield a well-executed result. As Laura Jasinski, the planning and design manager for the Greenway Conservancy, pointed out, “You need local folks who know the city, who know the buildings, the area.”

As for the city of Boston, the project’s success and positive community response thus far affirms that we can expect to see further transformation of its public spaces through the inclusion of modern art pieces, a trend that is likely to gratify not only the construction industry, but also local residents, tourists, and art aficionados alike.

Katherine Marr is the communications coordinator for The Marr Companies of South Boston.