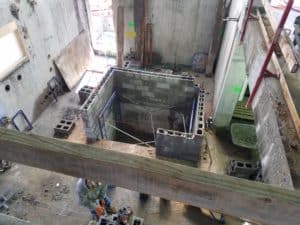 Cold Spring Harbor Laboratory on Long Island sought to build a new addition to an existing laboratory on campus while also completely renovating the interior and exterior of Demerec, a mid-century modern laboratory that has housed four Nobel laureates.  Demerec will be home to the new Center for Therapeutics Research, which will foster advancements already underway in breast cancer, leukemia, autism, obesity/diabetes and lung cancer therapeutics.

The north and middle wings of the existing laboratory were constructed in the 1950s, while the south wing was added in the 1990s.  Retrofitting a building of this nature to fit modern needs, while also preparing for the future, is not without its challenges.  The team at e2 engineers had to be creative and innovative to balance code requirements and programmatic needs.  No singular solution would work. Agility was required to incorporate a variety of approaches across complex situations.

One of the major hurdles was the floor-to-floor heights of the existing concrete structure.  The original wings are concrete-framed buildings with steel roof joists and Tectum roof panels.  The existing floors are two-way reinforced concrete floor slabs.  Given the rigorous demands of MEP systems for a biomedical research facility, managing these depth requirements while facilitating the structural alterations necessary to accommodate the architectural programming was a considerable challenge. 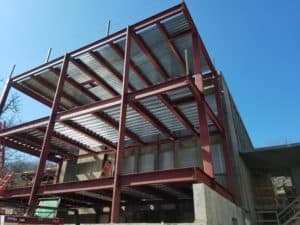 New lateral systems are moment-resisting frames of structural steel and align with depth of existing framing system for ease of mechanical distribution.

The program for the new facility called for multiple large openings created within the floor slab(s) to house stair and elevator structures, as well as numerous openings for mechanical ductwork.  While some conditions merited from framing the new openings with structural steel, others could not accommodate the additional depth of structure due to the need for building systems to have its own massing depth.  The team designed alternatives in response to these unique conditions.

It was critical to develop structural solutions that not only exceeded the requirements of the building code but also allowed for the passage of major mechanical, electrical, plumbing and fire protection systems to traverse within a plenum above the ceiling level unimpeded.  In some of these areas, concrete or steel framing systems were used within the framing depths of the existing structure. When this was not permissible, fiberglass reinforced polymers (FRP) fortified the concrete structure. 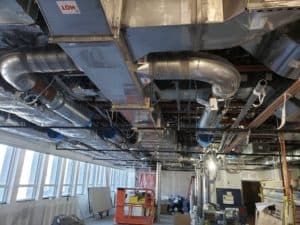 The rigorous demands of the MEP systems required close attention to managing depth requirements while facilitating structural alterations necessary for the architectural program.

The challenge with the new addition was to match new structure depths with that of the existing building in an economical way.  The geometry of the addition did not lend itself to the economy of repeating the two-way reinforced concrete slabs of the existing structure, nor did the structural requirements of the facility allow for the imperfections of precast concrete.  Therefore, the team at e2 engineers designed a composite system comprised of concrete slabs on metal deck supported by rolled steel shapes.  The lateral systems for the new addition are moment-resisting frames of structural steel.  The depth of the framing system was limited to 12 inches to allow for the same passage of mechanical systems as the existing buildings.

Adaptive thinking is crucial for renovation projects.  One example of this occurred on the roofs of the 1950s-era buildings where new mechanical equipment, along with mechanical screens, predicated the need to reframe the existing roof with new structural steel framing.  During construction, it was determined that the existing Tectum panels were no longer worth saving and they were replaced by all new metal roof deck.

Additional area was required for mechanical equipment, but the team wanted to maintain access to the surrounding landscape.  Therefore, at the northwest corner of the building, a new underground structure was constructed to house mechanical equipment.  Precast concrete panels supported by structural steel framing and cast-in-place concrete foundation walls house the equipment below, while above the lawn and patio areas are preserved for the staff and students to enjoy.

When faced with any challenge, especially the complexities of existing construction, it is important to consider multiple approaches.  Beyond offering solutions, this approach to problem solving can elevate the experience and performance of the project. 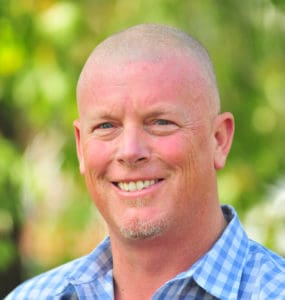 Scott Erricson, P.E., is a principal at e2 engineers and a member of the Construction Institute.