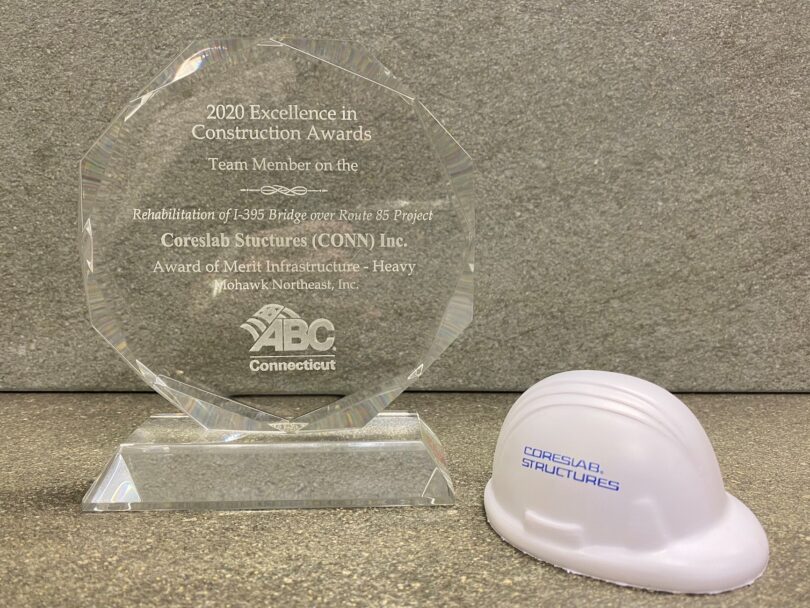 Associated Builders and Contractors, Inc (CT ABC) presented the Award of Merit Infrastructure in Heavy class to Contractor Mohawk Northeast for the rehabilitation of the CT DOT I-395 Bridge over Route 85 in Waterford, Conn. Coreslab Structures (CONN) Inc. received an award for supporting manufacturer for the bridge deck replacement job.

The project involved superstructure steel repairs, replacement of the existing two-span deck carrying I-395 over Route 85, as well as other associated rehabilitation work. Precast deck panels were installed, and a deck membrane was added to prevent water infiltration to the superstructure, followed by asphalt overlayment and the installation of a precast concrete center median.

The project utilized Accelerated Bridge Construction (ABC) techniques to minimize the impact to the traveling public associated with conventional construction methods. The work required two 10-day traffic diversions of both I-395 and Route 85 during the summer of 2019.

The interstate was diverted around the bridge by directing traffic off Exit 2 and then immediately re-entering traffic to the highway using the Exit 2 on-ramp. The ramps were modified to carry two lanes of traffic each during the diversions. Route 85 was detoured around the worksite during the two 10-day intense work periods.

I-395 and Route 85 combined handle more than 50,000 vehicles per day in the area. The state was lucky to have a rare layout of both north- and southbound off- and on-ramps directly across from each other, enabling the temporary detour of I-395 traffic. Occasionally Mohawk had to temporarily stop traffic on Route 85 while the crane hooked up the precast bridge deck panels and swung them onto the bridge.

The ABC process temporarily inconvenienced travelers, but caused less frustration than the alternative of 12-18 months of bridge lane shifts and closures. In total, 84 slabs were used in the deck replacement and all rehabilitation work was completed by the end of 2019.