Bryan Garcia speaks at the signing event for House Bill 6441 in Guilford.

Hartford, CT – The Connecticut Green Bank is marking 10 years of its model successfully enabling progress toward its goal of confronting climate change by mobilizing private investment into the state’s green economy.

Over the last decade, the Green Bank and its partners have deployed nearly $2.3 billion in capital for clean energy projects across the state. Projects recorded through FY 2020 show that, for every dollar of public funds committed by the Green Bank, nearly an additional $8 in private investment occurred in the economy. As a result, Green Bank-supported projects have created thousands of jobs, reduced the energy burden on thousands of families and businesses, avoided millions of tons of greenhouse gas emissions, and facilitated rapid growth in the deployment of clean energy.

Established on July 1, 2011, by Governor Dannel Malloy and the general assembly, the Connecticut Green Bank was the first of its kind in the United States.

“As we mark our 10th anniversary, we are motivated by the leadership and commitment from Governor Lamont and the continued support of the Legislature, demonstrated by the recent expansion of our mission,” said Bryan Garcia, president and CEO of the Connecticut Green Bank. 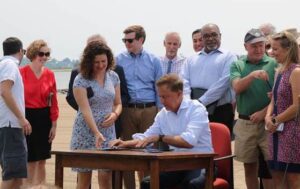 With bipartisan support, Governor Lamont’s House Bill 6441 was passed and will extend the green bank model beyond clean energy to include environmental infrastructure. This increased scope will encompass structures, facilities, systems, services, and improvement projects related to water, waste and recycling, climate adaptation and resiliency, agriculture, land conservation, parks and recreation, and environmental markets such as carbon offsets and ecosystem services.

A statutory requirement, the Green Bank will be developing a comprehensive plan over the next year to identify how its scope expansion can be supported through the issuance of bonds and accessing federal resources for environmental infrastructure.