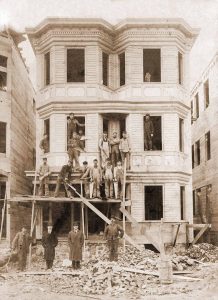 Sam Lilly and his brothers on Columbia Road in 1925

North Reading MA – Reflecting on the founding of Columbia Construction Company requires journeying back to what was happening around Boston in the 20th century. During this time Boston was flourishing and Samuel Lilly, founder of Columbia Construction, took advantage of this. Working as a trade carpenter with his brothers, Sam was involved in numerous residential projects. As the need for housing increased, in 1925 Sam Lilly went into business for himself. With a majority of construction happening on Columbia Road in Dorchester, Sam eventually named the company for the place where he found his early success.

In 1950, the company moved to Malden, Mass., and Sam’s son, Murray Lilly, came to work for the company. After working alongside his father for several years, Murray took over the business as president in 1954. During Murray’s time, a number of family members joined the company. At one time almost all of the cousins worked for the company, including Bruce Gordon, who at a young age rode along in the family car while his mother delivered bids for the company.

During the late ’50s, Columbia transitioned into the healthcare market. From 1955 to 1975, all of Columbia’s work was for healthcare institutions, and it was considered the go-to company for healthcare construction.

In the 1960s, Columbia outgrew its Malden offices and moved to North Reading. Around this time, Bruce Gordon became a full-time staff member. Bruce and the Columbia team worked on many prestigious healthcare projects. When the recession hit in 1973, the firm’s focus shifted to life sciences. Columbia completed its first project for Siemens (Corning Medical Products at the time), and has worked with Siemens ever since.

Though Columbia continued to work in healthcare and life sciences, in the 1980s the firm moved into hospitality work, and Murray’s son, Randy Lilly, joined the business. Randy worked as an architect on the West Coast, and his experience provided another level of insight to the firm. He consulted on several projects, including the renovation of 270 guest rooms at the Ritz Carlton Boston. Today, Randy serves as the company’s executive vice president/treasurer.

As the firm continued to grow, Bruce Gordon took on additional leadership responsibilities, and in 1987 he was appointed president. Ten years later, Jim Marsh joined the firm as senior vice president. Under the guidance of Bruce, Randy, and Jim, the company’s capabilities and resources expanded.

In 2005, the company moved to its current headquarters at 100 Riverpark Drive in North Reading. With an annual volume of over $230 million, the firm ranks in the top 10 of Massachusetts’ largest construction firms. Now, at 90 years old, and under the direction of a forward-thinking leadership group, Columbia is well-positioned to continue its growth in the Boston area and throughout the Northeast.