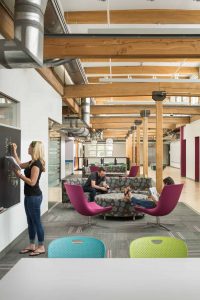 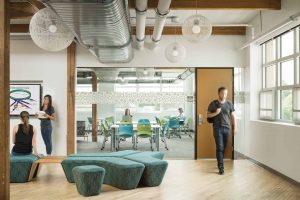 Designed by Stantec and completed last spring, the 95,000sf building — a former 1920s-era warehouse — now houses faculty, staff, and students from multiple disciplines, ranging from physics and robotics to human development and community health. The building was designed specifically to encourage collaboration and sharing ideas as members of these various disciplines interact in both formal and social atmospheres.

A loose play on the idea of Tufts’ mascot, Jumbo the elephant, the watering hole theme plays off the idea that a gathering space — whether it is a watering hole in the jungle or a lounge in a waiting area — brings its occupants together. While there are dedicated classroom, meeting, and offices spaces throughout the building, the design maintains a healthy amount of public social zones for cross-mingling of departments. A dramatic central staircase connects all four floors, while seating areas, whiteboard and blackboards, and meeting spaces fill the central core. 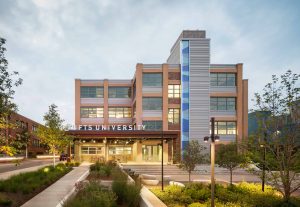 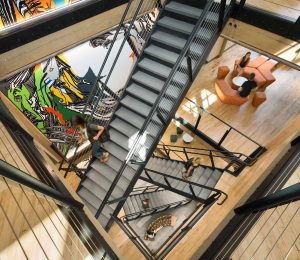 This collaborative theme was taken one step further in organizing the research areas around the concept of a visual lab. The design literally and figuratively broke down walls between groups, incorporating large, open research labs shared by multiple areas of study.

This not only fosters idea sharing, but also a more efficient use of building circulation and sharing of utilities and natural light. The open concept further embraces the idea that great things are happening at Tufts and they should be celebrated, not hidden behind closed doors.

As one of the largest buildings on campus, the CLIC creates a gateway for visitors approaching campus from the south with a decidedly modern, scientific aesthetic, blending the building’s historic timber frame with a more contemporary, industrial façade. The building also activates this section of the campus, turning a former parking lot into a rain garden and tree-filled park, with plans to convert the old carriage house into a restaurant later this spring.

“We centered the design around a ‘watering hole’ concept,” says BK Boley, Stantec architect and principal-in-charge. “While there are some spaces dedicated to specific groups, we tried to keep the majority of the building open as informal social or work spaces, creating a flow of collaboration. We’re really seeing that idea bear itself out now that everyone is together in the building.”

The design of the building’s exterior reflects the desire to create a science and technology hub on campus and a beacon of scientific learning with a connection back to central campus.