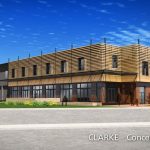 Milford, MA – Clarke, New England’s official Sub-Zero and Wolf Showroom and Test Kitchen, announced its first downtown Boston location, slated for opening in May 2015. To develop what’s being called the “showroom of the future” and “Clarke 3.0,” the award-winning distributor has purchased a 38,000sf building located at 7 Tide Street in Boston’s Seaport Innovation District.

Clarke has had a Sub-Zero and Wolf Showroom and Test Kitchen off Route 495 in Milford, Mass. and another in South Norwalk, Conn., since 2002. It has invited A.W. Hastings, New England’s exclusive distributor for Marvin Windows and Doors, to become part of the Boston showroom project. “Windows are an integral part of almost every kitchen design project,” said Sean Clarke, general manager.

Both companies will use the showroom to educate and inspire architects, designers, and homeowners about their wide variety of products and services, and refer customers to their respective dealer networks for the actual product purchase.

The 7 Tide building will be completely renovated, with the Sub-Zero, Wolf, and Marvin Showroom opening in spring of 2015 in 9,500sf on the main floor.

“We are very excited about this project,” said Clarke, who has worked with his father, company founder and CEO Tom Clarke, to identify the right property for their third New England location, which will be the 35th Sub-Zero and Wolf Showroom in the country. “We dedicated two years to intensive strategic business planning that guided us to develop an urban location, and another 18 months to finding the right building in Boston.”