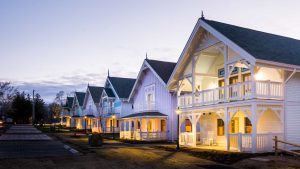 Prior to this expansion, which received a Palladio Award as the top Residential & Multi-Unit Project, the existing O’Neill Theater campus consisted of Victorian, Federal, and rustic farm buildings set amidst stone walls and expansive pastures leading down to Long Island Sound in Waterford, Connecticut. Centerbrook Partner Chad Floyd designed the new buildings to fit naturally into this setting.

“We thought a group of charming small cottages in the tradition of 19th-century Methodist Camps might minimize the impact of so much new construction on the campus’s lovely open space,” Floyd said. “We also liked the idea of a socially inviting village for the actors, playwrights and directors who visit throughout the year, and we hoped the porches and intricate Victorian detailing would convey the atmosphere of a simpler time.”

The Palladio Awards program, produced by Traditional Building and Period Homes magazines, is the only national awards program for projects demonstrating excellence in traditional design.