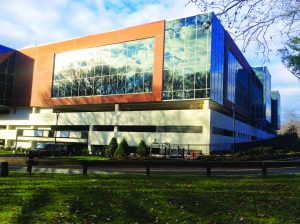 Summit, NJ – Officials at Celgene, the pharmaceutical company based in Summit, wanted to double the size of its campus in one fell swoop with the addition of a 540,000sf building that would contain two floors of offices above four floors of parking. To achieve this, designers used a total-precast concrete structural framing system for the parking levels, which served as a base for the office levels.

“The client was doubling the size of the campus in one new building, and with that quantity of employees, there needed to be adequate parking,” explains Ross Rosen, project engineer at Turner Construction Co., the general contractor. “Because the site was developed to the max, the only solution was to put the parking underneath the building.” Designers exploited the large grade slope to allow parking to be accessed at grade on one side and the offices to be entered from the other side at the higher grade. 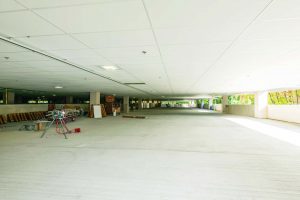 Precast concrete was chosen for the parking levels to prefabricate as many components as possible. This work sped up construction, as fabrication could begin while site preparation was completed, and it removed congestion and additional trades from the busy campus. Dailey Precast fabricated the precast concrete components, which were erected by JEMCO Erectors.

The precast concrete structure offers an open design with brick spandrels cladding the exterior. A white cement with color pigments was used on the exterior pieces while a gray mix was used on the inside. The mixes were custom-batched in Dailey’s automated mix plant. “Variations in color and texture are present with the natural stone and aggregates, so all exterior pieces received a sandblast and multiple stages of inspection to provide a more uniform finish,” says Timothy Breen, sales manager. 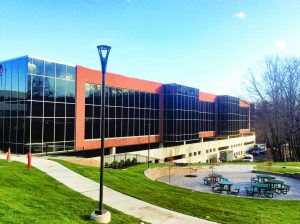 The parking levels were designed to contrast with the office floors above. “Since the office portion was going to be above the precast concrete parking, it was very important for the parking design to complement the building,” says Eric Scott, managing architect at Highland Associates. “We wanted the precast to act as a light base for the solid office levels.”

Full-thickness Monarch Sized brick, in a size of 15 9/16 by 3 5/8 by 3 5/8 inches, was embedded into the panels to create the masonry finish. “Brick was selected to tie the new building into the existing campus architecture, while the larger brick size was chosen to visually bring down the scale of the large building mass,” Scott explains. The client initially was hesitant about using prefabricated brick panels, he notes, until a plant visit showed them the panels’ infrastructure strength and overall quality.

The office’s steel-column loads were transferred to footings via additional precast concrete columns, shear walls, and precast lite walls built into the parking levels. A transfer deck was not possible due to total building-height restrictions in the area, he notes. Particular attention was paid to separating the parking levels from the office floors to deaden acoustics ceilings.

The precast concrete helped the building achieve LEED certification, especially through use of local materials and local manufacturing, as well as reductions in construction waste and other measures. “Material and proximity played a large role in helping us achieve certain credits,” Scott says.

Attention to detail ensured the project reached its goals, both functionally and aesthetically. “There was a working relationship to get the ideal final product from a design and cost standpoint,” says Scott. “Designers went to the precast facility and watched the sandblaster rough up surfaces to select the exact right amount for the finish and overall aesthetic.”