Boston’s historic waterfront — once a booming working center for our region’s shipping and maritime industry — is experiencing an inspiring rebirth that launches a new future for engagement with the shoreline while also honoring the past. New development, particularly along East Boston’s waterfront, is working as a catalyst to unlock the potential of vacant, underutilized property to foster public engagement and reintroduce both locals and visitors to our city’s rich seaside history.

The work being done along East Boston’s waterfront stands as a notable case study on ways collaborative property development and well-integrated design can produce an inspiring new destination that is intertwined with the past.

East Boston was a busy port and hub for industrial activity as early as the 1800s. The neighborhood served as the center of the city’s clipper-ship-building industry, home to many shipyards, wharves, and warehouses that dotted the neighborhood’s waterfront. Even after the age of wooden shipbuilding, East Boston maintained its status as a hub for shipping, marine repair, and industrial activity. It wasn’t until the late 1900s that these waterfront lots began to be seen as valuable locations for redevelopment and recreational activities.

Fueled by the region’s need for more housing, the revitalization of the post-industrial vacant lots along East Boston’s waterfront is providing new opportunities to reimagine underutilized land and to reconnect the public with our city’s maritime roots.

Copley Wolff’s site design for three new East Boston developments achieves this integration by weaving a common thread through the landscape design and wayfinding along the water’s edge to draw the public back to the waterfront and honor our city’s past. 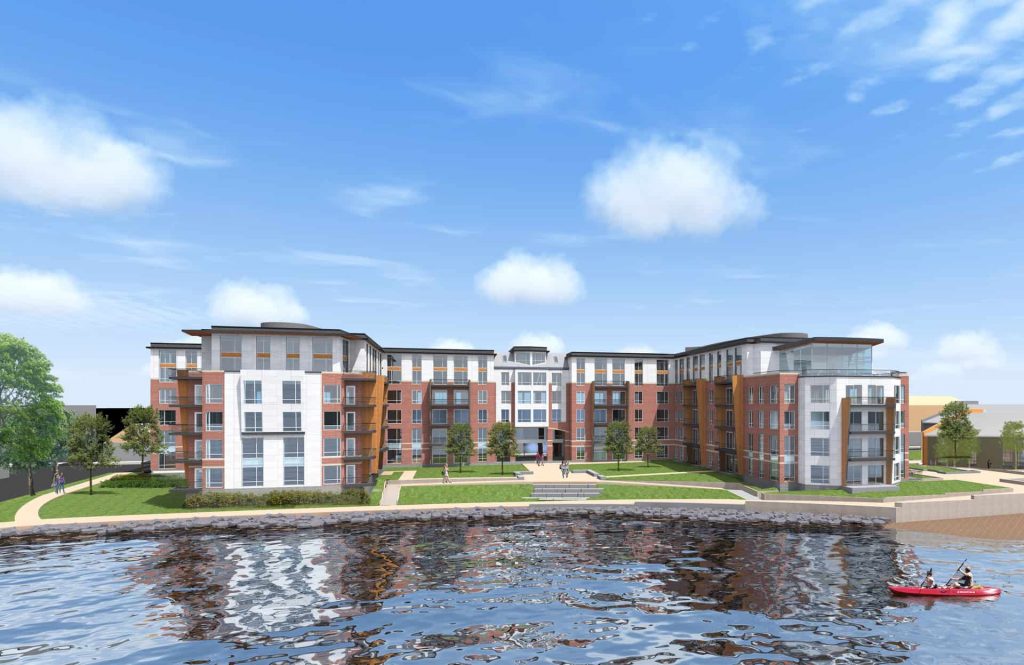 Among these projects is Boston East, which is currently under construction on a site that has been vacant for decades. The project will bring an apartment complex with “live-work-sell” units for artists, a kayak launch, a community gallery, and open space. As part of the Boston East development, Copley Wolff is collaborating with developer Trinity Financial and design firm ICON Architecture on the design of a public park that will display interpretive artwork reflecting the site’s shipbuilding and marine railway history. This interpretation of the social and historical meaning of East Boston in its local context will provide outdoor space that is unique, educational, and meaningful to users.

An added example is The Eddy, a residential project developed by Gerding Edlen and designed by Stantec, which opened its doors to residents late last summer. Copley Wolff’s scope of work includes the design of engaging waterfront-centric public amenities that encourage the public to enjoy and interact with the waterfront. Features such as extensive seat walls, a great lawn and monumental deck with panoramic downtown views, fishing stations, and an accessible boat launch allow visitors to reconnect with the city’s nautical tradition.

The Eddy /Photo by Nicolaus Czarnecki

Finally, The Davis Companies’ redevelopment of 99 Sumner St., located on the old Hodge Boiler Plant site, will make what has long been an inaccessible portion of the waterfront open to the public as it will provide a critical missing link in East Boston’s Harborwalk. Copley Wolff Design Group’s scope of work for the publicly accessible portions of the project includes the design of a broad water’s edge walkway that serves overlook areas, a shared public-private open space with shade structures with seating, a connection to an adjacent public park, and a 240-foot segment of the Harborwalk that incorporates historic interpretive markers.

The development of these three sites is helping to reposition the East Boston waterfront as a hub once again, but this time as a destination for housing, public recreation, learning, and interaction.

While each of these properties features landscape design components that are unique to the architecture and rich history of each site, the overall design integrates landscape strategies that carry a cohesive theme to create a continuous Harborwalk that attracts visitors and fosters education with references to the waterfront’s heritage. Complementing these elements are unique design features intended to encourage people to reconnect with the waterfront and learn about each site’s individual history.