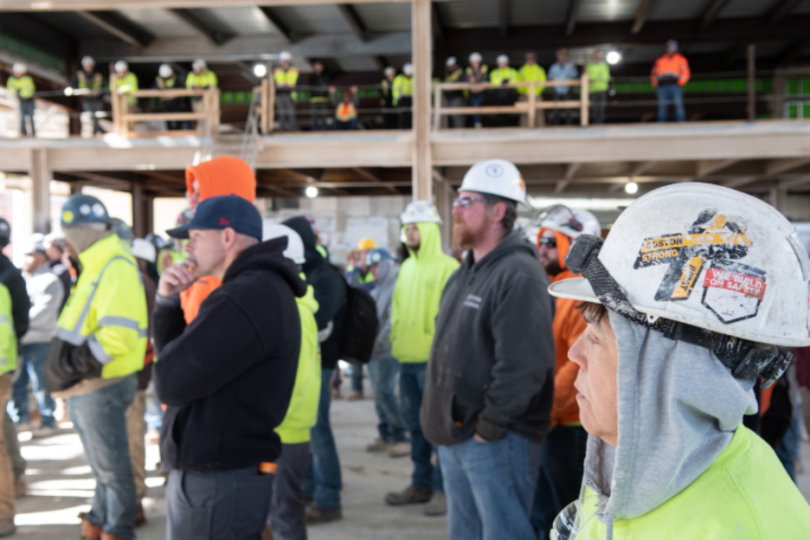 Boston – On April 29, over 500 construction workers participated in a stand down at Turner Construction’s 75 World Trade Center Ave. jobsite to address the skyrocketing overdose deaths and suicide rates in the construction industry. 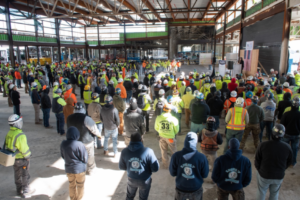 The National Stand Down is part of The Building Trades Employers’ Association (BTEA) Northeast’s 2022 National Recovery Week. The goal is to curtail substance use disorder (SUD) and its effects on the construction industry, and this year’s events took place on April 25-29.

At the stand down, Brian Chase, construction executive at Turner Construction; Paul Greeley of the Carpenters Assistance Program; Martin Walsh from the Laborers Union Local 223; and Thomas S. Gunning, executive director of BTEA Northeast, spoke to all 500 construction workers that joined together from three job sites of Turner Construction, John Moriarty & Associates, and Lee Kennedy Co. A 60-second moment of silence was held to recognize the 229 overdose deaths for every 100,000 construction workers in the industry. 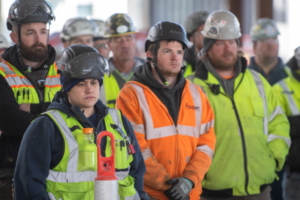 Gunning started the Building Trades National Recovery Week in 2019 with the mission to remove the stigma of SUD and save lives. Since then, general contractors and construction firms such as Turner Construction, John Moriarty & Associates, and Lee Kennedy Co. have instituted training on their job sites to combat the growing numbers of those struggling with pain and substance misuse.