Burlington, MA – Brennan Consulting, Inc. announced that it is underway on several education projects in Massachusetts.

“Our team is honored to work in concert with the Commonwealth’s 21st-century learning initiative and investment in education,” said Laureen Poulakis, president at Brennan. “We provide state-of-the-art technology in our delivery of preconstruction survey services, layout control, foundation and athletic field layout, steel erection surveys, construction as-builts, and traffic engineering in both the university and preK-12 submarkets.” 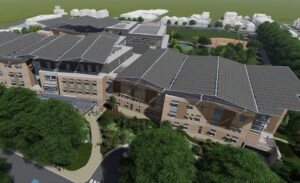 A new 3-story, 56,000sf Academic Student Success Center, 35,000sf in renovations, and an overhaul of the campus electrical infrastructure are underway at Bunker Hill Community College in Charlestown. The $63.3 million construction and upgrade of this 50-year-old campus began in April and is expected to be delivered in 2024. Several key innovative components are included such as solar, geothermal, and high-performance envelope design with accommodations for the rising sea level. The college sees 18,000 students annually.

The $104.9 million historic restoration and adaptive reuse of Oliver School in Lawrence, which includes a large-scale state-of-the-art addition, poses unique challenges due to its urban location, aged systems, and necessary upgrades for today’s public education. Originally built in 1917, the restored complex will house 1,000 K-8 students in approximately 162,000sf, combining the existing K-5 Oliver Partnership School and the UP Academy serving grades 6-8. Students and staff have been temporarily relocated for construction which began in May. Oliver is scheduled for a 2025 opening.

Breaking ground in June, the Stoneham High School project in Stoneham includes district offices; a pre-kindergarten; updated programming for grades 9-12 in three stories; an athletic complex; and the Spartan Place, an indoor/outdoor gathering plaza for students and the community. The $190 million, 208,000sf project replaces an existing 1968 building on 40 acres.  Opening in the fall of 2024 to 695 high school students, demolition of the existing building will begin shortly thereafter. Outdoor field construction will continue through 2025.