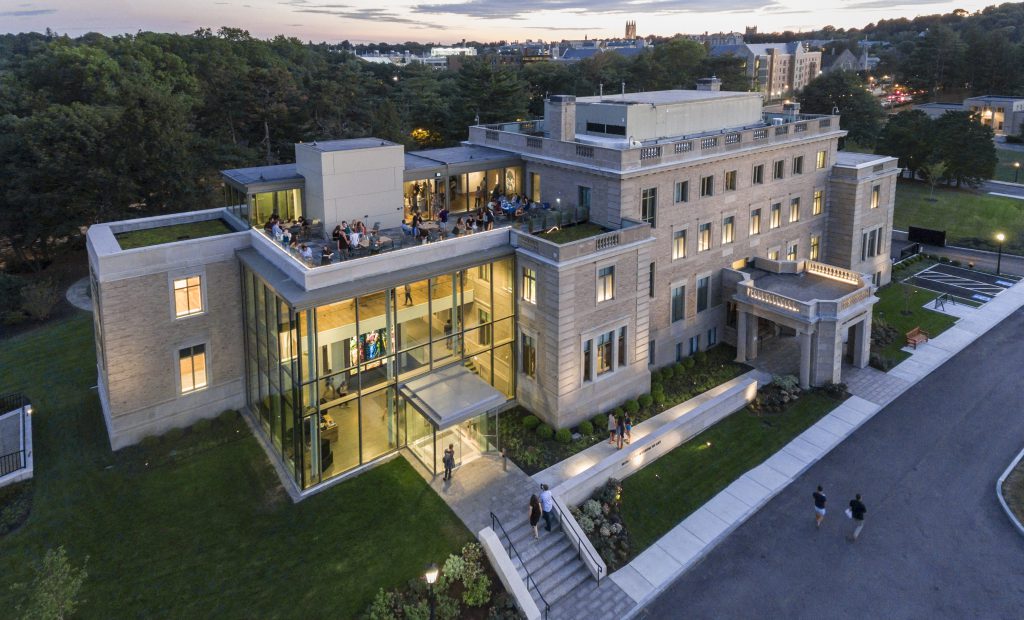 Art After Dark: The New McMullen Museum of Art in Boston

Since 1988, the Boston Preservation Alliance (BPA) has hosted its annual Preservation Achievement Awards, a program dedicated to honoring outstanding accomplishments in historic preservation and compatible new construction in Boston.

This past year, the McMullen Museum of Art and Conference Center was awarded a BPA Award. Additionally, with over 2,000 votes, it also received the highly coveted Fan Favorite Award. 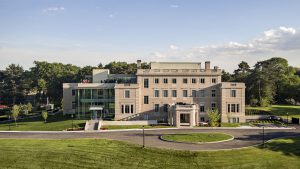 In dire need of repairs and a new purpose, the 1927 Renaissance Revival palazzo was bought by Boston College from the Archdiocese in 2007. Not sure of the college’s intentions, preservationists were concerned for the building’s future, particularly given its prominence in the neighborhood.

“Finding successful new uses for large, monumental, institutional buildings isn’t easy, and the cost to rehabilitate them and the value of the land on which they sit often leads to unfortunate outcomes for historic fabric,” said Boston Preservation Alliance Executive Director Greg Galer. With its new acquisition, the college could have easily taken the unfortunate path toward demolition and new construction, ignoring the building’s beauty. Wisely, the college’s project team, led by DiMella Shaffer, instead decided to restore and transform the 23,000sf structure into the new McMullen Museum of Art and Conference Center. 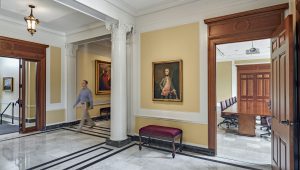 Formerly the home of Cardinal William H. O’Connell and other successive cardinals, the mansion was built as a statement — a physical manifestation of Boston Catholicism. Once referred to as “Little Rome,” Pope John Paul II even granted it a visit. Compromised by time, weather, and previous renovations, the primary goal was to return the building’s façade to its original 1927 grandeur while sensitively modifying it to accommodate its new function.

One of the biggest challenges was creating taller gallery space on the second floor. To heighten the ceiling, the team removed the roof behind the balustrade, reinforced the existing walls, and built a new roof that aligned with the top of the balustrade. This approach created higher ceilings while maintaining the character of the building’s exterior. Other work included matching and restoring the original limestone, marble, and mahogany finishes and installing gallery-quality climate control systems. 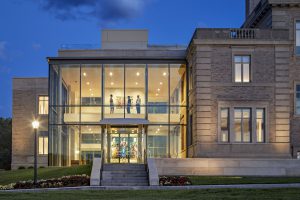 To ensure that this new museum could hold its own with the many university art institutions in the area, additional square footage was needed. Visitors now enter the museum through a new three-story 7,000sf glass addition. With its processional staircase, elevator, abundance of natural light, and panoramic views, the new addition contributes both functionality and a newfound vibrancy to the site. The fluidity and openness of the addition allows museum-goers to seamlessly float in and out of the large and flexible gallery spaces that occupy the second and third floors.

Previously situated in Devlin Hall, the new McMullen Museum now has double the gallery space that it had prior to the move. In addition to the museum, the first floor is home to the University Conference Center. Accessible through the mansion’s former main entrance, the conference center is equipped with five new meeting spaces, all of which have direct access to the formal lawn. 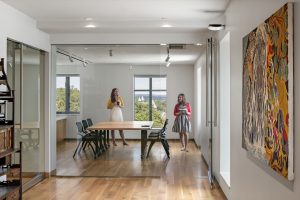 The new McMullen Museum of Art and Conference Center successfully blends old and new, a design challenge that is not easy to take on. Complementing one another, the two parts create an award-winning cohesion of style, material, and aesthetic. The once closed-off and introverted private mansion is now a welcoming and energetic site for members of both the BC community and Boston to enjoy for years to come. This prominent architectural statement of Boston’s history remains a seamless part of the modern cityscape. 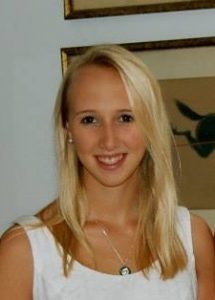 Caroline Lippincott is an intern at the Boston Preservation Alliance.