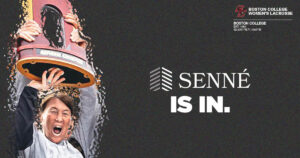 Boston – Senné announced its new year-long partnership with Boston College (BC) Athletics, prior to the Eagles’ 2021 season kick-off on Sept. 4.

The partnership will focus predominantly on BC’s football, hockey, basketball, and women’s lacrosse teams, representing all genders and all seasons. As part of this sponsorship and Senné’s ongoing efforts to support the local community, the firm will have visibility in BC Athletics marketing materials, social media, and on field and arena signage. It also marks one of the first instances to see Senné’s new campaign: “Real estate. Real results.” Senné will sponsor select BC Club networking events with future plans to extend the relationship into other avenues.