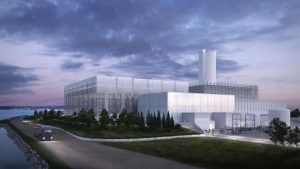 BOND has been engaged by the engineering, procurement, and construction contractor Iberdrola Engineering Projects to provide civil and utility construction and sitework services for the project. The firm’s scope of work will include the installation of more than 1,600 piles, 250,000 tons of imported backfill, and 22,000 cubic yards of concrete. BOND will also excavate and install nearly 30,000 linear feet of piping and conduit on the site.

The new natural-gas-fired New Salem Harbor Station will produce clean electrical power. Adding this new facility to the New England electrical grid will enable the region to reduce regional nitric oxide emissions by 10%, sulfur dioxide emissions by 8%, and mercury emissions by 6%. The incorporation of two General Electric 7F 5-series gas turbines into the plant will make it one of the most environmentally advanced in the country, permitting the region to avoid the emission of an average of approximately 450,000 tons of carbon dioxide per year.

These turbines will also facilitate the first “rapid response” power island in New England, providing the plant with the capability to add 300 MW of power to the grid within 10 minutes, facilitating the integration of wind and other renewable energy sources in the area.

The station will be built on the site of the 65-year-old decommissioned coal-and-oil-fired Salem Harbor Station generating plant. It will occupy less than a third of the former plant’s space, freeing up crucial room on the Salem waterfront for future development.

Working closely with Iberdrola and plant management, BOND will integrate “good neighbor” policies into their work plan to reduce the impact of construction on surrounding residents and businesses. As part of this effort, BOND will be bringing in shipments of gravel via ocean vessel to minimize the amount of truck traffic on local streets. The team will collaborate with plant management to deliver a smaller, quieter, and cleaner plant that includes design features to reduce sound levels and visual impact to the adjacent historic downtown Salem.

“BOND is honored to be a part of this world-class, high-performance energy plant,” said Robert Murray, BOND president. “This project supports our focus on delivering sustainable projects and integrating renewable resources into our community as much as possible.”