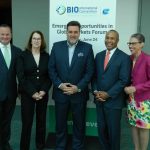 Cambridge, MA – BioOutsource, a global leader in biologics contract testing and BioSimilar characterization for the biopharmaceutical industry, opened its first U.S. office in 2013 in Cambridge. The new laboratory facility will support and strengthen the company’s biosimilar and biosafety service offerings. The company plans to open the new laboratory facility in early 2015 to service its North American and Latin American clients

Governor Patrick and other officials and industry leaders from Massachusetts met with more than a dozen companies at the BIO International Convention in San Diego that are interested in learning more about locating or doing business in Massachusetts.