Northeast Collaborative Architects (NCA) has long enjoyed a reputation as a leading architectural firm, particularly in the specialty areas of historic preservation and restoration. 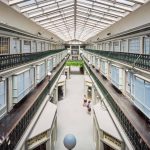 Through the years, NCA’s design excellence has been recognized with over 100 awards; 2014 has been a banner year that surpassed our expectations, as our practice garnered 19 awards for a wide variety of projects ranging from preservation to modernist projects.

The icing on the cake was smoothed on early this month when NCA travelled to Savannah, Georgia to accept the 2014 National Preservation Honor Award from the National Trust for Historic Preservation.

The National Preservation Awards are bestowed on distinguished individuals, nonprofit organizations, public agencies, and corporations whose skill and determination have given new meaning to their communities through preservation of our architectural and cultural heritage.

These efforts include citizens’ attempts to save and maintain important landmarks; companies and craftsmen whose work restores the richness of the past; the vision of public officials who support preservation projects and legislation in their communities; and educators and journalists who help Americans understand the value of preservation.

Stephanie Meeks, president of the National Trust for Historic Preservation, commented on the awards: “While each is unique, this year’s outstanding Honor Award winners all reflect the importance of protecting our nation’s cultural heritage.” 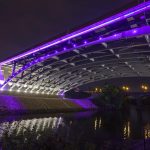 The national honor celebrates a new chapter for a Providence landmark. Built in 1828, the Providence Arcade, originally designed by Russell Warren and James Bucklin, was America’s first indoor shopping mall. The Nationally Registered Landmark has two Greek Revival temple fronts, one facing Weybosset Street and one on Westminster Street, and an interior three-story atrium that connects both streets. While the arcade had survived fires, hurricanes, floods, and demolition threats, the economic downturn of 2008 finally closed the doors, prompting the Providence Preservation Society to place it on the organization’s 10 most endangered properties list.

In 2012, NCA designed a $7 million adaptive reuse project to restore the landmark to a new life as a mixed-use center in downtown. The renovation reconfigured the upper balcony levels from commercial use into 48 micro lofts and helped address Providence’s affordable housing shortage. The ground floor now houses 17 micro retail spaces, and the arcade’s historic Ionic fronts have been restored as well. 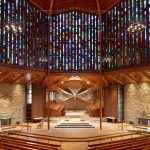 Our client and c-recipient of the award, Evan Granoff, 130 Westminster Street Associates, shared his thoughts: “The amount of public recognition of the accomplishment we shared in transforming the arcade into micro lofts and micro retail has been unbelievable. I realize that this was not serendipity and also involved a lot of hard work as well. Thank you for making that effort on all of our behalf.”

In addition to earning the award from the National Trust for Historic Preservation, NCA earned 18 other design awards this year. The distinguished projects include bridges, chapels, boutique hotels, a yacht restoration museum, a boathouse, and an airport intermodal connector.

Starting from our focus in preservation, adaptive reuse, or sustainability, NCA has consistently delivered quality, innovative projects. Our services include architecture, master planning, and sustainable design. Our work spans new designs, restorations, and adaptive reuse with a special interest in cultural, municipal, hospitality, education, and residential projects. NCA has offices in Newport and Providence, R.I. and Middletown, Conn.