Boston – Jeffrey Marr, Jr., vice president at Marr Scaffolding Company in Boston, was elected recently as president of the Associated Subcontractors of Massachusetts (ASM) for the 2021-2023 term. The event took place at the Granite Links Golf Club in Quincy and included the election of the ASM board of directors and officers. 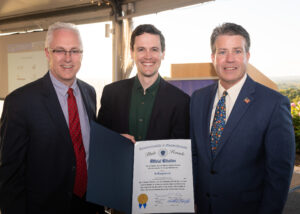 Massachusetts State Senator Walter F. Timilty also attended the event to give remarks and issue a proclamation from the state Senate congratulating Marr on his election as ASM president and thanking Gormley for his service as most recent president. Massachusetts State Representative William C. Galvin was also in attendance and spoke about his continued commitment to working on behalf of subcontractors.

Other officers elected at the event include:

Returning board members also elected to new terms on ASM’s board include:

“The skilled trades men and women represented by Associated Subcontractors of Massachusetts are the backbone of our economy. During my tenure in the state Senate, I have had the opportunity to both collaborate with, and learn from, ASM members. It is one of my primary goals to continue to actively work with ASM and its new president, Jeff Marr, about the issues impacting the industry, its membership, and the Commonwealth as a whole,” said Timilty.