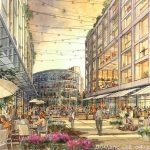 An innovative and sustainable phasing mechanism has been developed to implement the master plan, including a sequence that keeps the garage in place during early phases by carefully threading development on and around the existing structure. 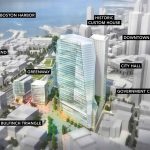 The western portion of the garage will be maintained intact and in use, resulting in a significant savings in embodied energy and materials.

Once the eastern half of the garage has been removed, Congress Street will once again be open to sunlight, and the eastern parcel will become an active public space that reunites neighborhoods and opens urban vistas. The project will add 812 new housing units and 3 million sf of development.