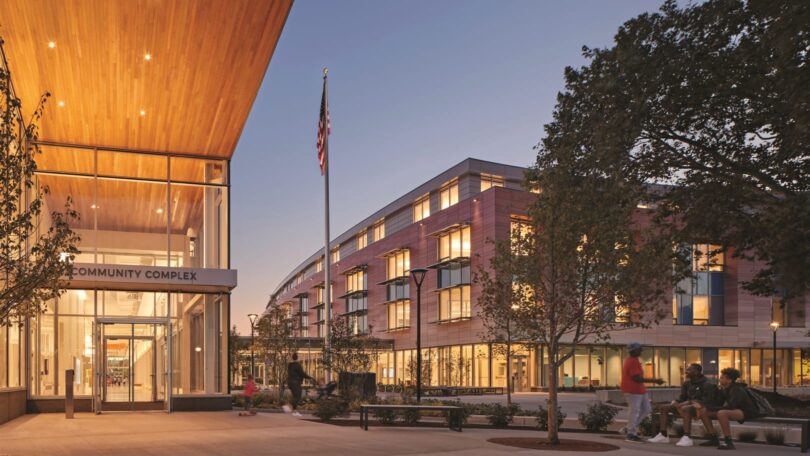 Washington –  The American Institute of Architects (AIA) and the American Library Association (ALA) awarded five libraries with the 2021 AIA/ALA Library Building Awards for excellence in architectural design.

The Roxbury branch of the Boston Public Library in Boston, and the Valente Branch Library in Cambridge, Mass. are two of the award winners. 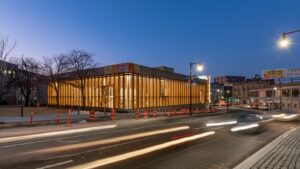 The Roxbury branch of the Boston Public Library was originally designed in 1978 by Kallmann and McKinnell Architects. During the 2020 renovation, the opaque facade was replaced with expanses of clear glass. Much of the library is wrapped in a timber and glass curtain wall that helps reduce energy consumption while filtering the natural light entering the grand reading room.

The library’s front door was relocated and the entrance is capped with a new entry canopy and garden that doubles as a gathering spot thanks to its terracotta sunshade. Interior glass walls and portions of the second floor were removed to draw in natural light while amplifying the drama of the original design.

The existing exposed concrete has been softened by wood accents, such as bookshelves and ceiling baffles, and playful elements, including a custom mural of a storybook landscape replete with reading animals and insects, were added to the children’s area. The architect for the project is Utile, Inc.

The 10,000sf Valente Branch Library in Cambridge is an anchor in a much larger community-focused complex. It serves both nearby schools and the greater community, providing learning spaces for families and patrons of all ages. The focus is shifted from a place to store books and volumes to a place for gathering and the exchange of ideas.

At more than twice the size of its previous location, the library’s newest home reconnected the city and park through its central green spine, positioning the library as a critical community and educational resource.

The team embraced social justice as one of the project’s core values and designed it for universal access. The library reflects the cultural diversity of the city, where more than 50 different languages are spoken. The architect for the project is William Rawn Associates, Architects, Inc.