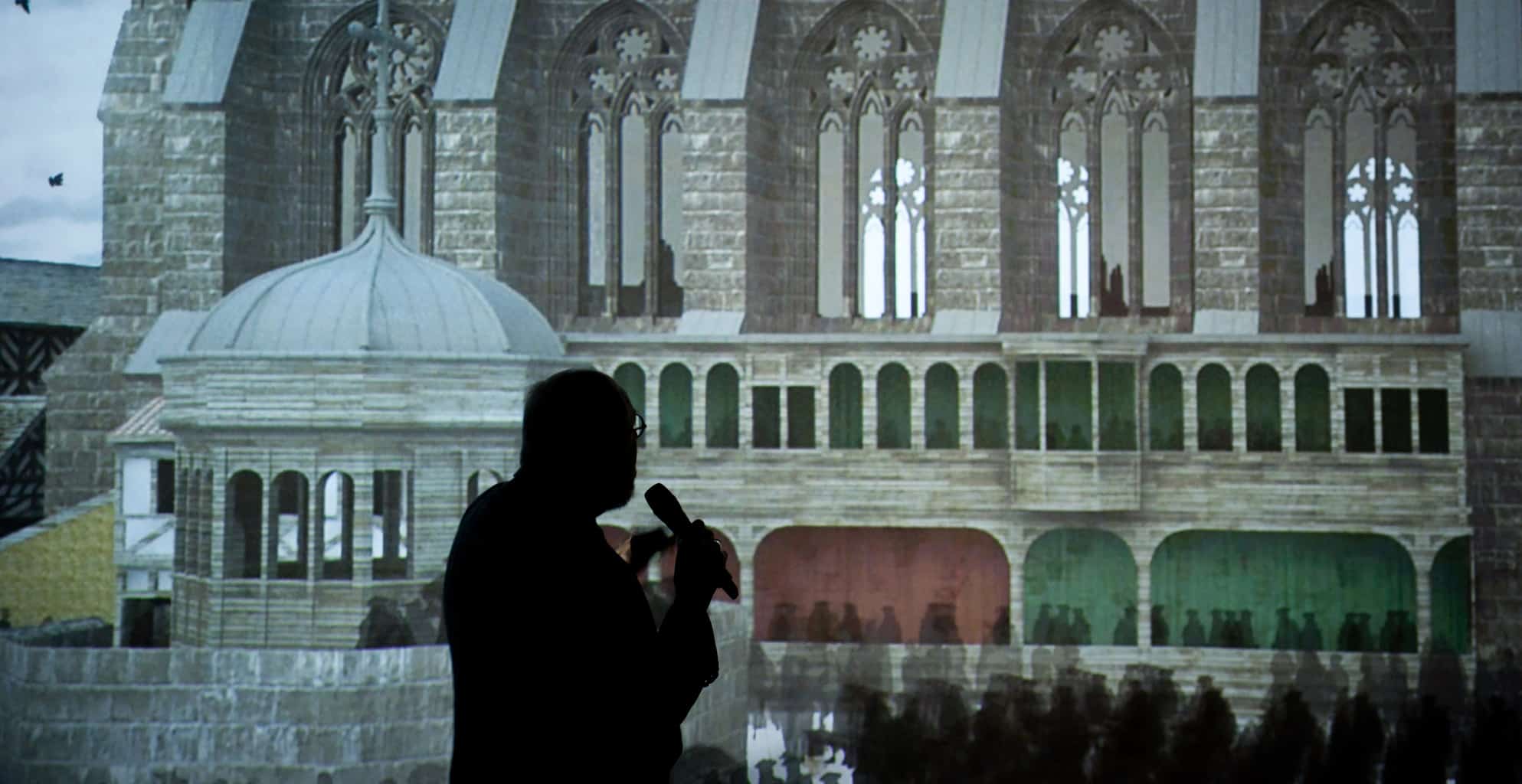 Cambridge, Mass – Acentech Inc., recently announced  that it has completed the first stage of a collaboration with North Carolina State University on the “Virtual Paul’s Cross Project,” an acoustical archaeology study made possible by a Digital Humanities Start-Up Grant from the National Endowment for the Humanities. A new branch of archaeological study, acoustical archaeology seeks to explore the sounds of earlier times and make these sounds available to modern listeners using auralization technology.

The Virtual Paul’s Cross Project (http://vpcp.chass.ncsu.edu/), directed by Dr. John N. Wall of North Carolina State University, uses both visual and acoustic modeling to recreate the experience of John Donne’s 1622 Gunpowder Day sermon at Paul’s Cross, outside St. Paul’s Cathedral in London. For this project, Acentech combined an anechoic recording of Donne’s famous Gunpowder Day sermon, a computer recreation of St. Paul’s Cathedral (as it was prior to being destroyed by the Great Fire of London in 1666), and custom software that was written to generate a full soundscape of 17th century London.

Acentech’s auralization (or acoustical simulation), created by Benjamin Markham and Matthew Azevedo, is a surround-sound reproduction of the entire two-hour sermon given on Nov. 5, 1622, complete with the sounds of an artificial intelligence generated crowd, the bells of St. Paul’s, and the general ambience of 17th century London consisting of passing carts, horses, dogs, and birds. The simulation software can vary the crowd size from 20 to 5,000 people to recreate what it might have been like to attend and hear the sermon.

“Acentech’s simulation of this historic event creates a spatially accurate three-dimensional soundfield using multiple speakers around and above the audience,” said Azevedo, a consultant in acoustics at Acentech and primary developer of this simulation. “Building on our existing auralization technology, this project borrows techniques from computer-aided music composition and audio production to create an immersive acoustical environment that allows us to vary the Paul’s Cross listener’s position in the audience as well as the crowd’s size and intensity in real time. The result is a soundscape that includes the sermon, crowd response, and the ambient sounds of pre-Industrial London.”

Acentech’s auralization was recently installed in the high-tech Teaching and Visualization Lab in North Carolina State University’s new state-of-the-art James B. Hunt Jr. Library, designed by the Oslo- and New York-based architecture firm Snøhetta. It is also available online, where viewers can navigate around the courtyard, explore the acoustics of the sermon, and learn more about Donne and the project. North Carolina State University’s news release for the opening of the installation may be found at http://news.ncsu.edu/releases/wms-donne-2013/.

John Donne (1572 – 1631) was an English poet, satirist, lawyer and Protestant priest who gave his Gunpowder Day sermon at the request of King James I on Nov. 5, 1622, the anniversary of the attempt by a group of Catholics to blow up the king and his Parliament in 1605. Traditionally, Gunpowder Day was an occasion marked by deeply anti-Catholic invective. However, in 1622 James I was in the process of negotiating a closer relationship between Catholic Spain and Protestant England, a political move that was widely unpopular. In his 1622 Gunpowder Day sermon, Donne needed to tread carefully between repudiating the Gunpowder plotters while supporting the king’s authority to direct English foreign policy. Sermons delivered from St. Paul’s Cathedral were a major event in London, aimed at both delivering religious messages and serving as political speech and entertainment to the crowds of influential Londoners as well as commoners.

Additional support for the project has been provided by North Carolina State University, including the College of Design, the College of Humanities and Social Sciences, the School of Architecture, the Department of English, and the University Libraries. Dr. Wall’s blog on the project may be found at http://virtualpaulscrossproject.blogspot.com/.