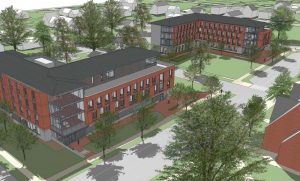 College campuses are often compared to living organisms: Their architectural heritage is their DNA. Their landscapes reflect the values of the past, while aspiring and evolving to the changing needs of the future.

As the city of Lewiston, Maine has grown around Bates College, the boundary of the once pastoral campus has blended into the surrounding neighborhoods. This fall, when Bates students arrive on campus, they will be welcomed by a new gateway, one which not only celebrates their initial arrival, but that anchors the residential life of the campus community. 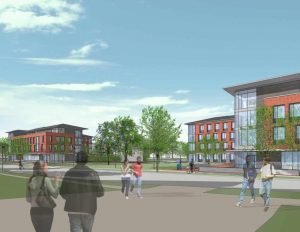 The new housing creates a connection between the campus and the neighborhood.  / © Ann Beha Architects

Working closely with administrators, faculty, staff, and students, Ann Beha Architects (ABA) has designed two new mixed-use residence halls that are set to be completed by the end of the summer. The project began with researching the rich architectural history of the Bates Campus. While many campuses are constantly in a physical state of flux, Bates opts instead for a slower, methodical evolution; few new-construction projects have been completed on campus in the past two decades. 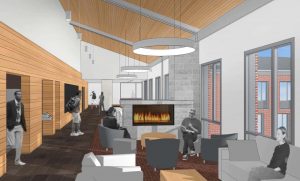 Sited across Campus Avenue from two of the campus’ earliest buildings, Chase Hall and Muskie Archives, the new buildings, 55 and 65 Campus Avenue, are clad in brick and granite, extending the Bates vernacular across the street to a side of campus that was largely occupied by two-story clapboard structures. Few buildings on this side of campus stand taller than three floors. This scale is acknowledged in the setback of the new buildings’ fourth floors. By sensitively responding to their context and the materials of the campus, the new residence halls are undeniably of Bates.

Campus projects are rarely afforded the opportunity to add green space, yet the college and design team were able to create new active and passive use lawns which are central to the project. Rain gardens, planted with hearty native flora, frame the lawns and walkways. The robust lawns will provide a flexible venue for students to play Frisbee or to lie down and study, while catching and filtering 100% of the rainwater that falls on the buildings and 95% of the site’s rainwater. Porous paving, approximately 100 new trees, and thousands of plantings will dot the site and further filter captured rainwater. Designed to exceed LEED Silver standards, the buildings’ shared central chiller and boilers contribute to the reduction of energy consumption by more than 40% compared to the code baseline building.

Perhaps the most defining aspect of this project is its mixed-use program. Originally conceived of as three buildings including two residence halls and an administrative building, it was determined that two buildings better fit the scale of the site with less impact on the surrounding neighborhood. Rather than compromising the program, ABA and Bates sought a way to meld the public aspirations of the campus bookstore and package center, formerly located in the basement of Chase Hall, with the high-security needs of a residence hall. The solution includes a flexible student living room at 65 Campus Avenue which can be extended into the campus store during business hours, and is zoned to host community events such as a book signing. The unique result of this flexible space is a destination that will attract students from across the entire campus and entice members of the community to make use of the new package center, bookstore, and green space.

The project’s 240 beds are a mixture of single- and double-bed rooms. Common spaces are aligned on each floor and punctuated by floor-to-ceiling windows, offering daylight and views back to campus. At night, the living rooms, study rooms, and kitchens will glow to reveal the activity inside while acting as a beacon to signify that Bates is busy preparing its students for what lies ahead in the future. With the completion of these two new buildings, there will be no denying you have arrived at Bates. 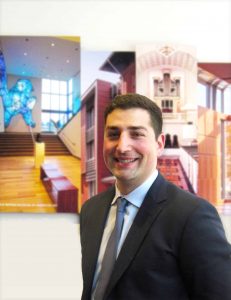