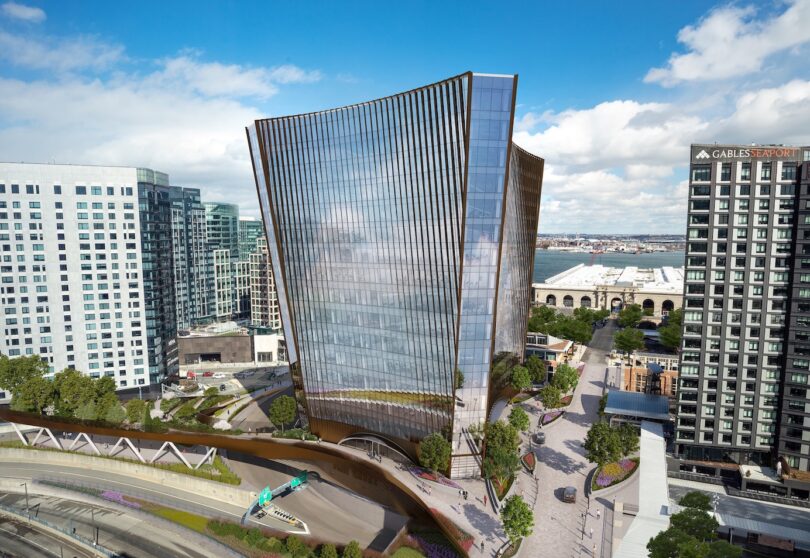 Boston – On March 31, Boston Global Investors (BGI) and its development partners celebrated the official groundbreaking of 10 World Trade, a $600 million life sciences building located in Boston’s Seaport neighborhood. The ceremony was held at the Omni Boston Hotel at the Seaport.

Designed by Boston-based architecture firm, Sasaki, the property is defined by a uniquely curved and high-tech glass facade and surrounded by an array of indoor-outdoor connected spaces. The 17-story building will deliver over 555,000sf of new workspace for life sciences and office users, as well as retail and cultural space at the ground levels where the project also has over two acres of new outdoor public improvements. 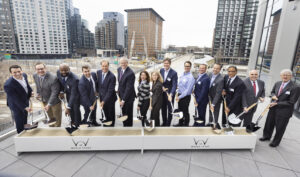 “In an area known for being home to corporate headquarters and world leading companies, this building stands out on all levels: design, building technology, amenities, and public spaces,” said Molly Heath, managing director at JLL.  “As the Seaport District continues to evolve, this project is truly forward looking and will meet a strong demand for lab space.”

Onsite amenities will include a 150-seat auditorium, a sky-level fitness center, and cultural and entertaining programming activations throughout the year. The building’s chilled beam HVAC system, tall floor-to-floor heights, and large column-free floor plates are designed to meet the flexible needs of life science and office users alike. The curtain wall system will also feature View Inc.’s Smart Windows, which use artificial intelligence to automatically adjust in response to the sun, maximizing natural light and outdoor views while optimizing building occupant comfort and reducing energy consumption from lighting and HVAC. 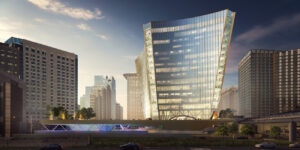 The building’s smart design incorporates multiple innovative features to enhance sustainability and wellness including touchless systems, augmented air flow systems, post-pandemic safeguards and energy-saving measures. The building will be among the first in the region to achieve certifications from SmartScore and SITES, and according to John Hynes IV, vice president at BGI, is pursuing Gold (or better) certifications from LEED, WELL, and WiredScore.

The two acres of sustainable indoor/outdoor public space will include a revitalized World Trade Center Avenue and a pedestrian footbridge connecting the existing roadway over to a new structured park. At the ground level, a domed ceiling will reach 45 feet in height and house a food hall, an onsite cultural tenant, and a 24/7 accessible connection between the Congress Street and World Trade Center Avenue levels. Sasaki’s design centers around the idea of an urban push/pull, with this multi-story ground floor appearing nearly transparent from the exterior while the building’s corners surge outward toward nearby landmarks, such as Boston Harbor, the Seaport and Congress Street, the SBWTC and BCEC, and Summer Street. 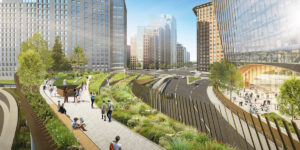 The BGI team was designated pursuant to a Massport RFP and is the second project to be built using the “Massport Model” for diversity, equity and inclusion. “We are excited to celebrate the groundbreaking of a new iconic building in the South Boston Waterfront,” said Massport CEO, Lisa Wieland. “Boston is known globally as a leader in the life sciences, and we look forward to growing our hub and the city’s recognition on the world stage. This project is once again showing that putting DE&I on equal footing gives us all a leg up.”

Suffolk will be teaming with H.J. Russell & Company, one of the largest Black-owned construction services and real estate development firms in the United States. Representatives of Suffolk say it is committed to ensuring its ambitious diversity hiring compliance plans will be implemented and participation goals will be met or exceeded, and that the company’s diversity hiring initiatives will be characterized by a proactive outreach program that provides equal access and opportunity for all qualified firms.

“Sasaki’s design for 10 World Trade is nothing short of iconic and will cement its position as one of Boston’s most significant commercial projects,” said Hynes. “This project will have an incredible impact on the community and this milestone would not have been possible without the visionary efforts of Sasaki and all of our project teams. We eagerly anticipate welcoming visitors and tenants to enjoy all that 10 World Trade has to offer when it opens in Q4 2024.”