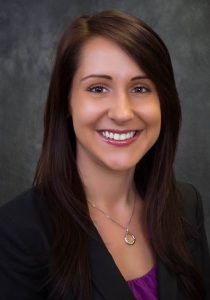 Westfield, MA – The Connecticut chapter of the Women’s Transportation Seminar (WTS) recently elected Rebecca Ruitto Hall, P.E., to its board of directors. She assumes the role of treasurer for the 2015-2016 calendar years.

Hall is a professional engineer with experience in traffic signal system designs, traffic impact studies and traffic management plans, as well as parking demand studies. She recently designed the traffic signal system for the Bridgeport Hospital’s Park Avenue Campus development in Trumbull, which was a recipient of the Connecticut Society of Civil Engineers’ 2014 Transportation Achievement in Civil Engineering Award. She also has designed traffic control signals for communities such as Glastonbury, New Britain, and Danbury. In addition, she has performed traffic impact studies and management plans for numerous other Connecticut cities and towns.

Hall joined Tighe & Bond’s Middletown, Connecticut office in 2011 and has been active in the WTS Connecticut chapter since that time. A licensed professional engineer in Connecticut, she earned her bachelor of science in civil engineering from the University of Connecticut. In addition to being a WTS member, she is a member of the Institute of Transportation Engineers. Hall is also a resident of Glastonbury.