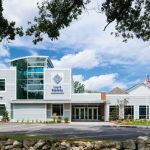 Nashua, N.H. – The World Academy School of Nashua was chosen as the winner of the IFMA Small Project (<50,000sf) award. Brent Maugel, president of Maugel Architects, accepted the award on behalf of the design team.

following are excerpts from an article by Dan Barton, AIA, the director of design at Maugel Architects.

World Academy serves children from infants and toddlers through to Grade 8 in one facility–allowing them to grow increasingly comfortable within their school setting, as they develop both socially and intellectually.

In 2010 World Academy set out to plan a state-of-the art addition, that would nearly double the size of its building, transform the visual character of the school, and reorganize and expand site circulation and outdoor amenities.

Head of School and Founder, Kathy Nelson, wanted the “new” World Academy to inspire creativity and open-minded thinking within modern, light-filled open space. The project was to be a successful union of the school’s new and old buildings, and to allow clear, safe circulation throughout the campus. Major project components included:

The character of new structure respects the former building by using clapboards and glazing as the prominent exterior finish materials, by having simple geometry, and through being sensitive to scale. The new “connector” provides a welcoming entrance and indoor gathering space, while effectively allowing for indoor circulation between the former school building, new Middle School and the new gymnasium/theatre arts building.