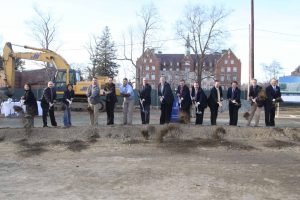 Headmaster Edward P. Hardiman, PhD and Principal Keith A. Crowley, PhD led the April 3rd groundbreaking ceremony. The new facility is expected to be completed in September of 2015. St. John’s is a Xaverian Brothers sponsored school for young men in grades 6 through 12.The new building expands on the concept of STEM education (science, technology, engineering and mathematics) to include a campus-wide focus on multi-disciplinary education.

Highlights of the building include a robotics lab, a seminar room, a study room, flexible work and meeting spaces, and a two-story, multi-purpose lobby on the first floor.

Design elements such as interior glass walls will be used extensively throughout the first and second floors to visually engage students with the projects and activities going on inside. This concept extends to the exterior of the building, where outdoor spaces will allow students to carry conversations beyond the classroom.

It will be fully accessible and is designed to meet the requirements for Leadership in Energy and Environmental Design (LEED) Silver certification.