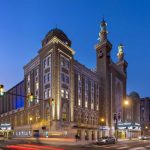 Partly funded by state and federal historic tax credits, the restoration provides space for pre- and-post-performance activities in several restored “parlor rooms” and in a 15,700sf grand ballroom that will host private events. Inside the theater, an audience capacity of 3,600 people allows the Altria to present shows by top-tier contemporary artists and theater companies seeking to perform in the largest performing arts venue between Atlanta and New York City.

Built by the Shriners in 1927 and designed in a distinct Moroccan style, the theater was known as The Mosque by generations of theater goers. 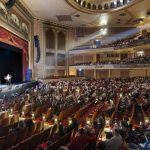 Hotel rooms, a ballroom, meeting rooms, a swimming pool, even a bowling alley and shooting range, were included in the original building program. The Mosque was purchased by the city of Richmond in 1940.

The restoration included repairs and refurbishing of the five-story façade, including its historic terra cotta details and decorative tile work, which were authentically restored. The lobby fountain was creatively adapted with blue crushed glass to replace water and ensure patron safety. Interior light fixtures, paint, tiles, and finishes were restored based on historic photographs and research to bring these ornate features back to their original 1920s appearance.

“The Altria Theater truly is a treasure and a one-of-a-kind experience,” said Bruce Herrmann AIA, director of Wilson Butler Architects.