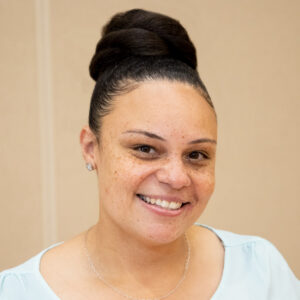 As a young mother of two, Renee Dozier was determined to find a career path that offered security and stability to her family, something that would make her kids proud. After several years, one union electrical trade apprenticeship and many seized opportunities later, Renee has gained financial security and a priceless, in-demand skillset as a journeyperson electrician. Today, in her new role as an IBEW Local 103 business agent, Renee is paving the way for other women and people of color to access financial freedom through family-sustaining careers.

Renee officially ascended to her role as business agent for the Boston region in June. In this capacity, she leads key business development opportunities for the union, its members and its signatory contractors, while simultaneously working to connect Boston city residents, women, and people of color to electrical apprenticeships just like the one that kicked off her own career in the industry.

“As a woman of color who is the leader of our union’s presence and recruitment efforts in Boston, I am living proof of the opportunity that exists for upward mobility,” says Renee. “I am proud that we are doing more every day to increase the diversity of our membership. It’s a top priority that we are putting our full focus and resources toward.”

In addition to her role as business agent, Renee serves on the board of the Empower DEI program, a new initiative by IBEW Local 103 and NECA Greater Boston electrical contractors aimed at increasing the number of women-owned (WBE) and minority-owned (MBE) union contractors in the electrical industry. She also chairs the Electrical Workers Minority Caucus, and Local 103’s Women’s Committee.

Most recently, Renee was appointed to serve on the board of trustees overseeing the jointly-funded IBEW Local 103 and NECA Greater Boston Trust Fund, one of the state’s largest set of employment funds that administers benefits to thousands of Local 103 union electrical workers and their families.