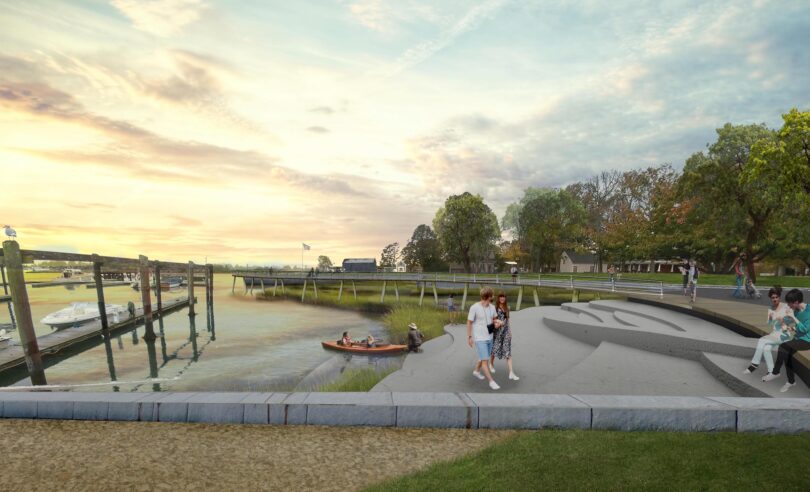 As the impacts of climate change-driven sea level rise and intensifying storms become more apparent and more severe, the first lines of defense in many coastal areas are waterfront parks, open spaces, and other recreation areas. Such is the case with city-owned Prescott Park, a 10-acre park located in the heart of downtown historic Portsmouth, N.H., with over 1,150 linear feet of Piscataqua River waterfront. The park hosts hundreds of thousands of visitors annually for regular daily use, a seasonal performing arts festival, and public forum events. 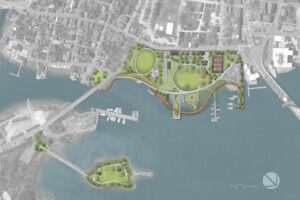 As the low point in the neighborhood, Prescott Park and its immediate neighbors are prone to flooding. Being within or near many of the city’s historic resources such as Strawbery Banke Museum, the city’s oldest neighborhood, and historic maritime structures, having a comprehensive resiliency strategy is critically important to the park’s proposed improvements. As such, it is one of the city’s prime candidates for implementing a series of strategies that together will mitigate the impact of sea level rise and flooding from an increasing number of intense rainfall events for the entire neighborhood.

In 2017, the adoption of the Prescott Park Master Plan launched an “Implementation Strategy” effort in which Weston & Sampson analyzed the current and future flood risks at Prescott Park and evaluated mitigation strategies to minimize the threat of increased stormwater runoff, storm surges, and sea level rise. We evaluated several climate scenarios for Prescott Park and the immediate area under baseline (2000-2020), mid-century (2040-2060), and late-century (2080-2100) climate conditions.

Under baseline climate conditions, we found that most flooding currently occurs upgradient of Prescott Park, with only minor flooding within the park itself thanks to the park’s dry wells. Hydraulic modeling showed that this trend remains true through mid-century, but that in late-century climate conditions, flooding patterns and depths are expected to change significantly as sea levels rise and more severe storm surge events happen more frequently. Under those future conditions, many of the smaller outfalls and drain systems in the park begin to surcharge from their associated manholes and catch basins, flooding the park and surrounding neighborhoods.

With the goal of reducing such flooding overall, Weston & Sampson’s proposed resiliency approach is three-fold:

1. Protect the park along its seawall edge (install tide gates and raise the sea wall);

2. Retreat critical infrastructure (raise and shift historically and culturally significant buildings to a higher elevation); and

These proposed improvements would be expected to make an immediate and long-lasting impact on area flooding. For example, under the proposed 2090 climate scenario, this series of interventions together would be projected to reduce uncontrolled flooding within the park itself by 97% and reduce flooding in nearby streets and neighborhoods by 39%.

Well-designed and strategically placed parks like Prescott Park, at the interface between land and water, can mitigate the threat of climate change-driven sea level rise, storm surges, and increased rainfall intensity. It is time to start thinking of them not only as quality-of-life benefits that enhance residents’ health and well-being, but also as municipal resources that can be flexibly adapted to mitigate the effects of a changing climate. We invite you to help us celebrate communities like Portsmouth who think of their waterfront parks and open spaces the same as they do their water, sewer, transportation, and energy systems – as the critical infrastructure components they are. 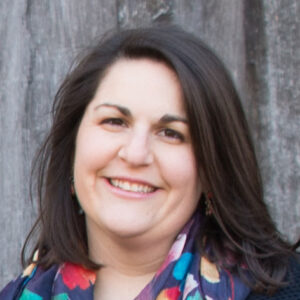