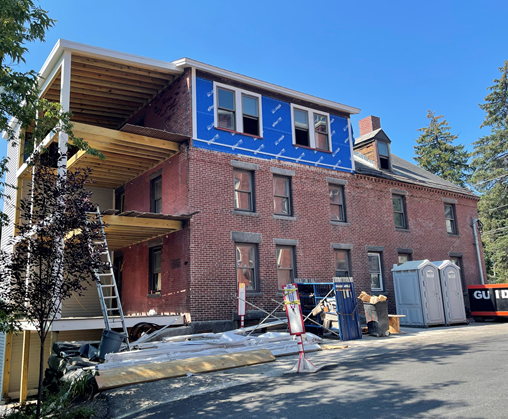 Leominster, MA – MassDevelopment has partnered with Clinton Savings Bank to provide $2,520,000 in loan financing to Summer Street Apartments, LLC., an affiliate of Cougar Capital Management, which will use the proceeds to convert a vacant former rooming house at 41 Summer St. into 21 market-rate rental housing units in downtown Leominster.

Originally constructed in 1840, construction began in March 2021 on the 3-story building, which will include two one-bedroom units and 19 studios and micro-units. The complex is expected to be complete by the end of the year. The building played a role in Leominster’s early industrial history by housing workers from several factories; it was previously owned by companies such as the Prescott Comb Factory, Reed Toy Factory, and the Goodale Comb Company.

Clinton Savings Bank provided a $2,120,000 construction-to-permanent loan while MassDevelopment provided a $400,000 bridge loan, which is supported by $693,618 in Housing Development Incentive Program (HDIP) tax credits allocated by the Massachusetts Department of Housing and Community Development that will be monetized when the project is completed. The project has also received state and federal historic tax credits, a tax increment exemption (TIE) from Leominster, and is leveraging the Qualified Opportunity Zone (QOZ) program to make this renovation financially viable.