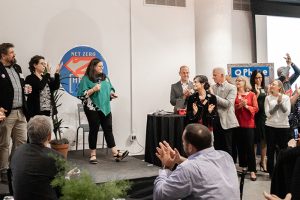 Boston -The US Green Building Council Massachusetts Chapter, Inc. (USGBC MA) is changing the name of the organization to Built Environment Plus. More than two-thirds of its current members voted in favor of the change which has been approved by the Mass. Secretary of State.

The change is intended to reflect the growth and evolution of the organization and its continued strong relationship with USGBC national, and  partnerships with other industry leaders.

Officials noted that LEED remains integral to its mission and it will continue to partner with ILFI, as the home of the New England Collaborative, and to promote WELL, Fitwell, Passive House, Envision, and others partners advancing its mission.

Barbra Batshalom, USGBC MA board chair and Meredith Elbaum, USGBC MA executive director stated in a recent release that “The plan is based on five key areas: education, community & celebration, research & resources, advocacy, and organizational excellence.  We believe the rebranding effort, in combination with the new strategic plan, will further enable us to meet our mission.”