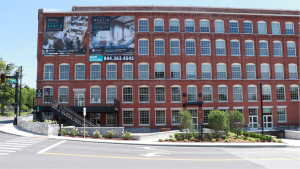 Phase One is comprised of 65 market-rate apartments and 28,000sf of commercial space, featuring a restaurant and coffee shop, with the remainder of the space targeting medical, legal and technology companies. 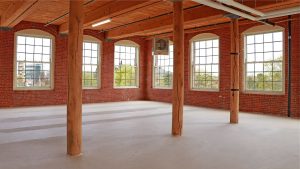 The mill building, formerly home to Comfort Furniture and Bedding mill, was originally constructed in 1882 as the Hood’s Sarsaparilla Laboratory, the largest medical manufacturing building in the world at the time. The renovated space was designed by architectural firm CUBE 3 Studio and built by The Lupoli Companies.

Located just minutes from major interstates and adjacent to the Gallagher Transit Terminal, Thorndike Exchange was recently recognized as the Silver Winner at the 2019 PRISM Awards for Best Historical Renovation by the Builders and Remodelers of Greater Boston.

Marlborough-based Universal Window supplied 470 historic replica windows from its 550 Series for the renovation, which were installed by J&R Glass. Universal previously supplied windows for large portions of another Lupoli project, The Riverwalk in Lawrence, which was the sole recipient of the Preservation Massachusetts Mayor Thomas M. Menino Legacy Award at the Preservation Massachusetts Awards in 2018.

“Working on projects involving the Lupoli Companies, which transforms communities through job creation and economic development in gateway cities, is a tremendous source of pride for our company,” said Jim Finn, president and CEO of Universal Window and Door. “We look forward to continuing our relationship with them in transforming obsolete historical structures into useful purposes.”