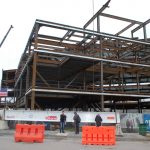 Dorchester, MA –  The final beam was hoisted recently atop the frame of the new General Academic Building No. 1 (GAB No.1) on the northeast corner of the UMass Boston campus. The four-story, 190,000sf building is set to open in fall 2015. The $113 million GAB No. 1 will feature nearly 2,000 seats of general-purpose classrooms, along with teaching laboratories, art and performance studios, a theater, and a 150-seat recital hall.

GAB No. 1, which is next to the Campus Center, will support the university’s growing student enrollment and course offerings. It will house three academic programs: Art, Chemistry, and Performing Arts.

UMass Boston broke ground on the building in February 2013. It is part of a 25-year master plan that includes an Integrated Sciences Complex, scheduled to open this fall; the Edward M. Kennedy Institute for the United States Senate, which is also slated to open this year, and the reconfiguration of the roadways, harborwalk, and utility infrastructure of the entire campus.