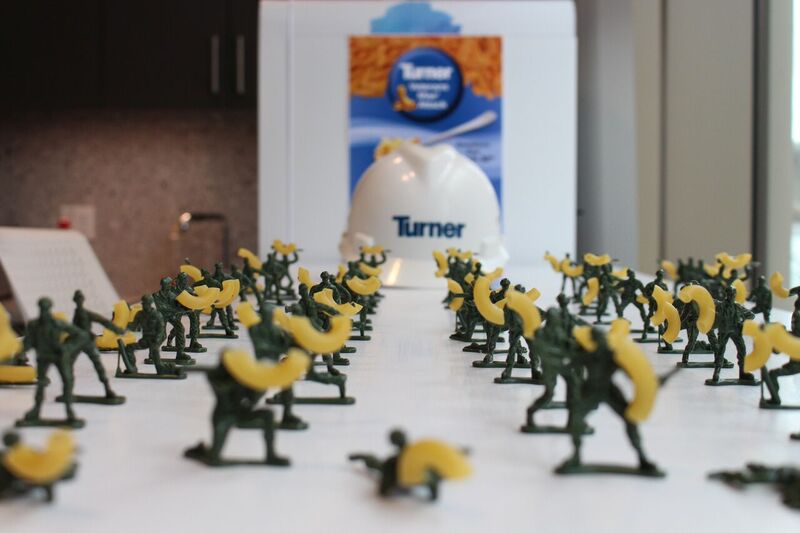 Revere, MA – The Turner Construction Company Boston team has established a unique way to support local, former servicemen and women and their families by holding an annual macaroni and cheese, “Mac Attack,” donation drive. The 2020 drive was the third successful event, with collection locations across nine project and office sites in addition to a new option this year for virtual giving.

Turner’s employee led resource group, the Military Veterans Network, has worked with staff to collect over 1,500 boxes of macaroni and cheese to donate to the Revere Veteran’s Service Office, an organization that services over 400 families throughout the city of Revere.

Since its inception in 2017, the drive has expanded with help from Turner Boston’s Military Veterans Network, an employee resource group with the mission to ensure a positive working environment for veterans and position them for success in their careers. The employee resource group creates outlets to help foster relationships and trust among Turner veterans, similar to the camaraderie established when serving in the armed forces, with the goal of echoing this positivity to Turner peers and the greater community.

“As the office of Veterans’ Services, helping change lives is what we strive for daily,” said Marc Silvestri, director of Veteran Services for the city of Revere. “In doing so we are not only strengthening our veterans and family members, we are strengthening our community as a whole. This being our goal, it can’t be done alone… It has been an honor a company the size of Turner Construction still has the respect to honor the smaller veteran organizations such as the city of Revere.”

Since its inception, Turner’s Mac Attack drives have provided thousands of boxes of macaroni and cheese to local veterans and their families.

The food donation drive began in 2017 when Allison Ferrari, Turner’s office manager in Boston and a resident of Revere, began coordinating with the Revere Veteran’s Services office. “They told me there is such a demand for mac and cheese that they can’t keep it on the shelves! So we decided to focus on that,” said Allison Ferrari. “We named the drive the Veterans Mac Attack and put up posters at all jobsites and around the office to raise awareness…In the end, the office dramatically exceeded their own expectations, collecting thousands of boxes of mac and cheese.”

“The Military Veterans Network is a family of service members and veterans from Turner that come together to create change and positive influence in Turner and our community,” said Turner project manager, Rafael Rodriguez.

The Revere Veterans Service office provides services and benefits to eligible veterans and their families in a timely manner in compliance with Massachusetts General Laws. They represent and advocate for veterans and family members with the U.S. government and private agencies, veteran service organizations and the public, to maximum utilization of available resources.